Happy public beta week! This week saw the release of a complete set of public betas for Apple's major upcoming operating system updates, giving everyone the chance to check out all of the new features and changes.

Subscribe to the MacRumors YouTube channel for more videos.
We also saw a slew of rumors on everything from the iPhone 13 and the MacBook Pro to AirPods and the Apple Watch Series 7, so check out our video above and read on below for details on all of these stories and more! 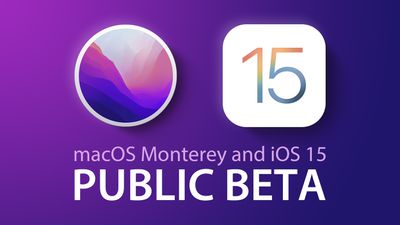 Apple had said at WWDC that the public betas would launch in July, but all of them except macOS Monterey arrived just a bit early on June 30. A word of warning though: Don't install these betas on a primary device, or at least make sure to have a backup, as there can be significant bugs and usability issues.

It's a rite of passage as we get closer to the introduction of new iPhone models: We've moved beyond the leaks and design drawings to full-fledged dummy units that show off what we expect to see from the iPhone 13.

Apple is currently preparing to ramp up production of the upcoming iPhone models, lining up suppliers to start delivering components in mass quantities.

Many Apple fans were disappointed at the lack of an announcement about redesigned MacBook Pro models at WWDC last month, but we won't have too much longer to wait if a new report is accurate.

Taiwanese site DigiTimes says the new models will be announced in September, although October might be more likely as Apple prefers to separate its iPhone and Mac announcements and the new iPhones are expected to return to their normal September launch timing.

We've been hearing rumors about updated AirPods models for some time, and the most recent claims are continuing to hint at timing for these releases.

Noted analyst Ming-Chi Kuo says second-generation AirPods Pro are expected to launch next year, with previous reports suggesting they will arrive in the first half of the year. Another recent rumor says unspecified AirPods should launch later this year, which lines up with what we've been hearing for the third generation of the regular AirPods.

Since the launch of MagSafe alongside the iPhone 12 last year, some health experts have been warning about the potential risks of bringing products containing magnets close to pacemakers and other medical devices.

In response, Apple has updated a support document with a long list of Apple products that should be kept away from medical devices to avoid potential interference.

The Apple Watch Series 7 coming later this year is expected to feature a redesign with flat edges and display improvements, but one thing that's been up in the air is whether we'll see any new health-related sensors.

Apple has been working on sensors for metrics like blood glucose, but a new report says the Series 7 will prioritize battery life improvements rather than trying to pack more sensors into the watch.

ThatGuyInLa
I think I’m finally getting to the age where I just don’t care much about tech. Beyond buying some of it I might need at a minimum. Oonly to replace something broken. I don’t care about what it can or can’t do. Using new features.

I think I’m finally getting to the age where I just don’t care much about tech. Beyond buying some of it I might need at a minimum. Oonly to replace something broken. I don’t care about what it can or can’t do. Using new features.

Tech hasn’t been evolving the way it was 5-10 years ago. Apple hasn’t given me a reason to update my almost 5 year old iPhone X, or my 2018 iPad Pro. Only reason I need to update my MacBook Pro is that it is so old I can’t update to the latest operating system, and now my notes aren’t compatible with iOS 15. Nice ti save money though!
Score: 4 Votes (Like | Disagree)

I think I’m finally getting to the age where I just don’t care much about tech. Beyond buying some of it I might need at a minimum. Oonly to replace something broken. I don’t care about what it can or can’t do. Using new features.

Dang, I was thinking the same thing' when I read this article. After a few decades of being a mac-aholic, I've become somewhat jaded. Even so, the main reason I'm still wearing the armband has more to do with iOS and the Apple Watch. I'm now at an age where medical issues dominate my lifestyle. The evolving technology of the AppleWatch and medical-centric features is one of the few reasons I'm still on board.

My last two MacBook/MacBook Pro's were garbage. The butterfly keyboards, failed display, useless touch bar, and lack of real-world ports have me looking at a Windows option for my next purchase. Sure, I will miss the macOS, but that's okay.
Score: 2 Votes (Like | Disagree)

ZipZilla
Until we get more ARM Macs, everything is disappointing
Score: 1 Votes (Like | Disagree)

symphony1010
I find myself agreeing with others in that tech is not moving forward significantly enough to justify upgrading as often. The M1 has been the exception. My 2016 SE has worked better for me in some respects than my wife's XS as it has fingerprint recognition! Still fast enough and capable of 4K video. I look at Windows 11 and Monterey and for the first time I haven't gone with the betas - same with iOS. Very suspicious of the tie up between Microsoft and Amazon within W11 and will steer clear of that. Then I wonder what the pricing of iPhone 13 will be as we approach stagflation not to mention availability in the first few months. A friend has just bought a 12 Pro rather then find himself having the long wait. It's time to approach these purchasing decisions with more thought.
Score: 1 Votes (Like | Disagree)

Tech hasn’t been evolving the way it was 5-10 years ago. Apple hasn’t given me a reason to update my almost 5 year old iPhone X, or my 2018 iPad Pro. Only reason I need to update my MacBook Pro is that it is so old I can’t update to the latest operating system, and now my notes aren’t compatible with iOS 15. Nice ti save money though!

That's why Apple is pushing planned obsolescence so hard now. Moore's Law is running out of steam, chips are unlikely to ever go sub-nanometer, monkeying around with the UI only makes things worse (and Apple keeps doing it anyway), and so getting people to buy new tech is only really going to happen by forcing the old tech to stop working well before the end of its actual useful lifespan.

BTW, every MacBook Pro 2012 and later can definitely run Mac OS 12. It's just not officially supported by Apple, and you have to defeat the planned obsolescence lockouts. Some earlier ones can run it too. Don't replace a good computer before the hardware wears out.
Score: 1 Votes (Like | Disagree)
Read All Comments