Apple's next MacBook Air will feature a completely new design and come in a range of colors like the 24-inch iMac, according to leaker Jon Prosser, who has now released supposedly accurate renders of the new machines based on leaked images. 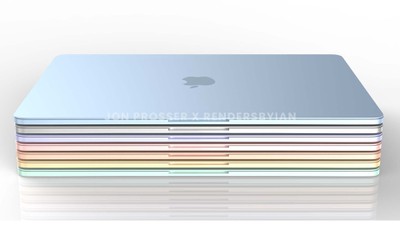 Prosser's renders are purportedly closely based on leaked images of a MacBook's aluminum enclosure. Prosser said that he came to the conclusion that the leaked images showed a ‌MacBook Air‌ due to its ultra-slim profile and dissimilarity to leaked schematics showing the next-generation MacBook Pro models.

Subscribe to the MacRumors YouTube channel for more videos.
Prosser said that the design of the ‌MacBook Air‌ is no longer tapered, but it is considerably thinner overall.

Like the Magic Keyboards for the new 24-inch iMac, the ‌MacBook Air‌'s keyboard will apparently be white and feature full-sized function keys. The larger function keys are said to have forced the entire keyboard down, thereby reducing the size of the trackpad.

There will be two USB-C ports, with one located on either side of the machine. Prosser said that a MagSafe port was not visible in the leaked images, so it was not added to the renders. A previous report from Bloomberg's Mark Gurman said that the next ‌MacBook Air‌ and MacBook Pro would feature the return of a ‌MagSafe‌ connector with faster charging speeds.

The underside of the ‌MacBook Air‌ will also see significant design changes, no longer having four rubber feet for support. Instead, there will be two long vertical strips.

The bottom of the ‌MacBook Air‌ render is said to be more accurate than the top half. The display and the size of its bezels are not known and purely speculative, but Prosser said that, just like the 24-inch ‌iMac‌, the new ‌MacBook Air‌ will feature white bezels.

One of the most significant changes will be the range of colors offered on the ‌MacBook Air‌ for the first time. Prosser gained knowledge of a Blue and Green ‌MacBook Air‌, but there will be color options to mirror the 24-inch ‌iMac‌'s color palette.

Specifically, the colors will apparently be "very close if not identical to the shades that you see on the stands for the new 24-inch iMacs." The ‌iMac‌ features more pastel colors on its stands, as opposed to the bolder, more striking colors on the ‌iMac‌'s rear.

Prosser accurately predicted that the ‌iMac‌ would come in a range of color options earlier this year. Nevertheless, it is worth noting that Prosser wrongly assumed that the ‌M1‌ ‌iMac‌ would mirror the iPad Air's color palette.

Prosser said that the redesigned ‌MacBook Air‌ will launch toward the end of 2021, if it launches this year at all. This is very similar to the timeframe outlined by Gurman, who said that Apple plans to release the new ‌MacBook Air‌ during the second half of this year at the earliest or in 2022.

These colors are for children not professional working adults.

As a professional working adult, I enjoy the objects in my life not looking dull and depressing.
Score: 44 Votes (Like | Disagree)

What is this kindergarten nonsense. Make it in Black

Boring people can have the silver one.

I'm down with the colors and the white bezels. Bring it on!!!
Score: 15 Votes (Like | Disagree)

Warped9
Anyone who has seen the current iPad Air already available in some of these colours can tell you they don’t look kindergarten. The insecurity of some is astonishing.

No one forces you to accept colours that aren’t to your liking. Just take the neutral silver and be happy.
Score: 13 Votes (Like | Disagree)

YoitsTmac
I don't know about others, but the white keyboard looks a little cheap to me. But then again I wouldn't want a white bezel or a green laptop either. I'm sure it appeals to some audience that is very different from the primary audience here.
Score: 12 Votes (Like | Disagree)

Cyluks
I actually like the fact that they're going to strips for the rubber feet, instead of just the 4 corners. My MacBook Pro has trouble staying still on my matte desk, so I hope this will provide just a little bit more traction.
Score: 11 Votes (Like | Disagree)
Read All Comments

Tuesday February 23, 2021 8:24 am PST by Hartley Charlton
Apple may offer a larger version of the MacBook Air with a 15-inch screen, according to a recent report from well-connected Bloomberg journalist Mark Gurman. The report focuses on Apple's plans for the future of its popular MacBook Air line and reveals that a considerably larger MacBook Air model has been in the works, although it appears it may yet be a while until we see it: The...
Read Full Article

Wednesday March 17, 2021 9:14 am PDT by Mitchel Broussard
Amazon today is offering Apple's 512GB M1 MacBook Air for $1,172.92, down from $1,249.00. This is one of the first notable discounts on the new MacBook Air since earlier in the year, and it's currently the best price available online among the major Apple resellers. It's being sold by Expercom on Amazon. Note: MacRumors is an affiliate partner with some of these vendors. When you click a link...
Read Full Article • 43 comments

Friday April 16, 2021 7:40 am PDT by Mitchel Broussard
M1 MacBook Air and Pro deals remain solid as we enter the weekend, with multiple best-ever prices hitting both models of Apple's 2020 M1 MacBook lineup. Prices start at $949.00 for the 256GB MacBook Air and at $1,399.00 for the 256GB MacBook Pro. Note: MacRumors is an affiliate partner with some of these vendors. When you click a link and make a purchase, we may receive a small payment, which...
Read Full Article • 22 comments

Monday April 12, 2021 7:19 am PDT by Mitchel Broussard
New Apple deals have emerged online this week, and we're putting the spotlight on a pair of sales for the iMac and MacBook Air. Both discounts focus on the 2020 updates to each product, and Amazon is offering all-time low prices for each device. Note: MacRumors is an affiliate partner with some of these vendors. When you click a link and make a purchase, we may receive a small payment, which...
Read Full Article • 10 comments