Apple today seeded the fourth beta of an upcoming macOS Big Sur 11.3 update to developers for testing purposes, with the new beta coming two weeks after the launch of the third beta and more than a month after the release of macOS Big Sur 11.2, a bug fix update. 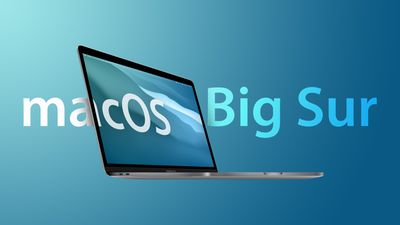 Developers can download the ‌‌macOS Big Sur‌‌ 11.3 beta using the Software Update mechanism in System Preferences after installing the proper profile from the Apple Developer Center.

macOS Big Sur 11.3 introduces more customization options for Safari, adding a way to rearrange the different sections on the Start Page like Favorites, Reading List, Siri Suggestions, Privacy Report, and more. Developers also have access to a new integration to develop features for the Start Page.

The update also includes optimizations for using iOS apps on M1 Macs. When running iPhone and iPad apps on ‌M1‌ Macs, there's a Touch Alternatives preference pane that allows users to set keyboard commands for touch input alternatives, plus iPadOS apps launch with a larger window if the Mac's display allows it. Touch Alternatives can be enabled for ‌iPhone‌ or ‌iPad‌ apps by clicking on the app's name in the menu bar and then selecting the Preferences option. Touch Alternatives let you customize taps, swipes, and drags.

Apple is adding a new "Made For You" library shortcut in Apple Music for finding personal mixes and Replay playlists, and the Listen Now section has been updated with support for highlighting live events.

The ‌Apple Music‌ app also features a new autoplay option that allows the streaming service to continue to play music after a playlist or music queue ends. ‌Apple Music‌ sources music similar to what's in a person's ‌Apple Music‌ library, similar to the autoplay feature added in iOS 14.

With this feature enabled, ‌Apple Music‌ audio will not end even after a playlist or album is over. To check that it's on, play a playlist or album and then click on the three dot/line menu button in the upper right hand corner. From there, make sure the infinity symbol is toggled on.

There's also an updated "Support" interface when accessing "About This Mac." The new design includes details on your warranty and it allows for starting a repair right from the Mac interface.

The tab works similarly to the AppleCare coverage menu in the iOS Settings app, which lets users request repairs, buy an ‌AppleCare‌ plan, and check their coverage.

For HomePod users, macOS Big Sur 11.3 brings support for ‌HomePod‌ Stereo pairs, allowing a set of paired HomePods to be set as the default sound output option, with the two HomePods showing up as a single selectable speaker rather than separate as in prior versions of macOS.

Code in macOS Big Sur 11.3 suggests that the Optimized Battery Charging feature will now make sure the Mac's battery is fully charged before a scheduled calendar event. The Mac will charge to 100 percent three hours before a calendar event's start time.

In Safari, there's support for WebM video playback, allowing users to play WebM videos using Apple's browser. WebM is a niche video format designed to be a royalty-free alternative to the H.264 codec used in the MP4 format. WebM allows video files to remain small without sacrificing quality and can be played with little processing power, making it ideal for webpages and browsers.

Code in macOS Big Sur 11.3 suggests that Rosetta could be removed from some ‌M1‌ Macs in some select regions after the software is released. There's a mention that "Rosetta is no longer available in this region. Applications requiring Rosetta will no longer run," but no additional information is available at this time.

There are also appear to be new assets that suggest a feature for mapping game controller buttons to keyboard layouts, and there's a Game Center toggle to enable or disable connections with friends, which lets games set you up with your friends or prevents apps from accessing that info.

More on macOS Big Sur can be found in our macOS Big Sur roundup. The software is expected to see a release this spring, with spring kicking off on March 20.

Mick-Mac
I wish Apple did something similar to what I've seen other company's do (like Microsoft) where a website of feature requests and bugs was maintained where people could vote on getting them dealt with. There are so many bugs (I'm sure Apple's internal list contains thousands of them), but what kills me is that many don't fall into the critical category, but they affect huge numbers of people many times/day. I know Apple have their apple.com/feedback site, but giving people the ability to see the bugs and be able to vote on their rankings seems like a great way to tackle things (to me anyway). Over than past 10 or more years, I've really soured on Apple's software quality control - so many things continuously remain broken across major macOS updates that much of the pride I had in owning Apple computers has been eroded away. We need Snow Big Sur! I still like their stuff better than Microsoft, but not anywhere near as much as I used to.
Score: 21 Votes (Like | Disagree)

blazerunner
WHERE ARE DRIVERS FOR AMD 6000 SERIES GPUS???
Score: 8 Votes (Like | Disagree)

Since all these updates always happen simultaneously, why not create one big article with all the OS updates instead of clogging the blog with an article for every damn OS ?

Because every damn OS *deserve* his own article? Example: We all read macrumors but I'm interested mostly in macOS development. I like reading comments about THAT not watchOS.
Score: 7 Votes (Like | Disagree)

Reason077
I wish you could (option-)drag to rearrange and remove bookmarks directly in the Bookmarks menu, instead of having to go through the "Edit Bookmarks" screen. Would be so much more convenient.

We can option-drag to remove menu bar icons from the menu bar, why not items from the bookmarks menu?
Score: 6 Votes (Like | Disagree)

Since all these updates always happen simultaneously, why not create one big article with all the OS updates instead of clogging the blog with an article for every damn OS ?

Simple answer - because comments are attached to articles.

I do NOT want to be going through hundreds of iPhone related comments when trying to understand/discuss the Mac OS comments.

Beyond that, links, sharability, clicks, revenue, the ability to keep producing content for us etc.
Score: 5 Votes (Like | Disagree)

TheGeneralist
A feature release...umm...well, OK.?
The most impressive and beneficial set of features which could be arisen by a macOS update are IMHO the huge number of small things which are currently not working properly and/or not working at all in 11.2.3.
Of course a bugfix release doesn't sound as sexy as new features in the first place, but it would just be...soooooo much more useful and worthwhile.

Taking into consideration how the release stability has been in different apple product segments over the months ago, when this version is released in maybe about 1-3 weeks, I'll wait for at least(!) 1-2 weeks of strict bug quarantine before even thinking about touching it with a ten foot pole.
Score: 5 Votes (Like | Disagree)
Read All Comments