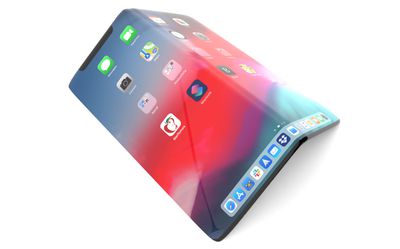 Citing supply chain sources, Economic Daily News says the testing involves evaluating the use of OLED or Micro-LED display technology, because the choice of either screen will affect the subsequent assembly methods.

Apple is also said to have asked Foxconn to evaluate the bearings (the folding component) of the devices with over 100,000 opening and closing tests. The report notes similar tests for regular laptops requires them to be opened and closed between 20,000 and 30,000 times.

The report offers no additional information on the design of the foldable device, but does note that Samsung will provide the panel for the screen, potentially corroborating rumors that Apple has ordered foldable display samples from the Korean company.

According to leaker Jon Prosser, Apple is working on a foldable iPhone prototype that features two separate display panels that are connected by a hinge rather than a single display like the Samsung Galaxy Fold.

Prosser says that the foldable ‌‌iPhone‌‌ has rounded, stainless steel edges similar to the ‌iPhone‌ 11 and no notch, but a "tiny forehead" on the outer display for Face ID.

Rumors about Apple working on a foldable ‌iPhone‌ date back to 2016, and there have been a number of foldable phone Apple patents, including one describing a device with two separate displays that could be brought together to create a single bendable device with a hinge. That said, foldable ‌iPhone‌ rumors offer no consensus on if or when such a device will come to market.

adamryan1983
I think folding phones are one of those 'just because you can doesn't mean you should' types of technology.
Score: 82 Votes (Like | Disagree)

It will need to go well beyond that based on the number of time I see my wife looking at her phone.
Score: 26 Votes (Like | Disagree)

Piggie
The idea of a phone that turns in a small tablet I find very appealing.
I'm sure many people would agree.
It's just we don't really seem to have any technology out right now to make this a desirable item right now.
Score: 17 Votes (Like | Disagree)

NewUsername
So if you unfold it, iOS becomes iPadOS?
Score: 16 Votes (Like | Disagree)

rmoliv
Folding phones are just a FAD. Drop it!
Score: 12 Votes (Like | Disagree)

dumastudetto
Take my money now, all $5,000 of it.
Score: 9 Votes (Like | Disagree)
Read All Comments