Facebook today warned advertisers that Apple's upcoming anti-tracking tools could cause a more than 50 percent drop in Audience Network publisher revenue due to the removal of personalization from ads within apps. 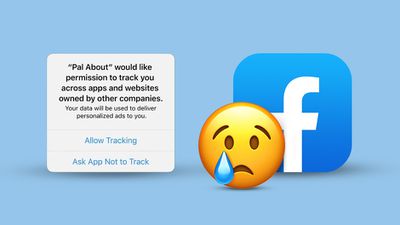 In a blog post, Facebook said that it does not collect the identifier from advertisers (IDFA) from Facebook-owned apps on iOS 14 devices, as Apple added a feature that requires users to agree to ad tracking to prevent cross-app and cross-site tracking used to provide targeted ads. Facebook says that it's not a change that it wants to make, but Apple has "forced this decision."

Apple devices offer an "Identifier for Advertisers" (IDFA) that Facebook and its advertising partners use for ad targeting purposes. In iOS 14, the IDFA is an opt-in feature, providing more transparency for users who would prefer not to be tracked in apps and on websites.

This is not a change we want to make, but unfortunately Apple's updates to iOS14 have forced this decision. We know this may severely impact publishers' ability to monetize through Audience Network on iOS 14, and, despite our best efforts, may render Audience Network so ineffective on iOS 14 that it may not make sense to offer it on iOS 14 in the future.

While it's difficult to quantify the impact to publishers and developers at this point with so many unknowns, in testing we've seen more than a 50% drop in Audience Network publisher revenue when personalization was removed from mobile ad install campaigns. In reality, the impact to Audience Network on iOS 14 may be much more, so we are working on short-and long-term strategies to support publishers through these changes.

iOS 14 has a prominent "Tracking" section in the Privacy portion of the Settings app, where users can disable the option for apps to track them all together. Even if this feature is toggled off, apps must still ask permission to track users across apps and websites owned by other companies, which is a blow to the silent ad-related tracking that has been going on behind the scenes.

Facebook says that many of its developers and publishers will be "hurt" by iOS 14 at an "already difficult time," and that it plans to invest time and resources into building monetization products for publishers and supporting platforms outside of iOS 14.

souko
Thanks Apple, you did great job.
Score: 89 Votes (Like | Disagree)

dwfaust
Everybody wins. No tracking. Maybe no Facebook soon.

dmccloud
Facebook is a joke. All that company cares about is its tracking and ad services, the actual customer be damned...
Score: 58 Votes (Like | Disagree)
Read All Comments