The Apple product launches just keep on coming, with Apple this week introducing AirPods Max, the premium over-ear headphones that were rumored over the past few months under the "AirPods Studio" name. 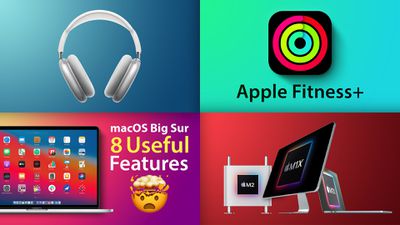 We also learned this week that Apple's Fitness+ subscription service will be launching on Monday, December 14 alongside the release of iOS 14.3 and related operating system updates, while we heard a bit more about Apple's ambitions for future Mac chips based on Apple silicon. Check out the details on those stories and more below!

Key features of the AirPods Max include high-fidelity audio powered by an Apple-designed H1 chip in each ear cup, spatial audio, active noise cancellation, and adaptive EQ. Design wise, the headphones have magnetically-attachable memory foam ear cushions, stainless steel telescoping arms, and a headband with a "breathable knit mesh" that distributes weight to reduce on-head pressure, according to Apple.

Similar to the Apple Watch, AirPods Max feature a Digital Crown on one ear cup for precise volume control and the ability to play or pause audio, skip tracks, answer or end phone calls, and activate Siri voice control. There's also a noise control button for switching between active noise cancellation and transparency mode, which lets some outside sound in so you can interact naturally with your surroundings.

AirPods Max feature up to 20 hours of battery life with active noise cancellation and spatial audio enabled, and they come with a carrying case called the "Smart Case" that puts the headphones in an ultra-low power state that helps to preserve battery charge when not in use.

Priced at $549, the AirPods Max are significantly more expensive than some other popular over-ear headphones, including Sony's WH-1000XM4, which are currently priced as low as $278. AirPods Max can be ordered now, with availability starting December 15, but the headphones are already backordered until March on Apple.com. There are five color options, including silver, space gray, green, sky blue, and pink.

Following the introduction of AirPods Max, Apple has provided select media outlets and YouTube channels with the headphones, and the first hands-on impressions and unboxing videos are now out.

AirPods Max come with a magnetic carrying case called the "Smart Case," which puts the headphones in an ultra-low power state to preserve battery charge when not in use, according to Apple. The case has already become the butt of a joke on social media, and many of the first impressions articles shared so far agreed that the case looks rather peculiar.

More detailed reviews of the AirPods Max will be available following their launch on December 15, so stay tuned for more coverage.

Apple Fitness+ will provide users with access to a library of workout videos related to strength, yoga, dance, running, walking, cycling, rowing, and more, with new content delivered each week from a team of trainers hired by Apple. Fitness+ integrates personal metrics such as heart rate from the Apple Watch to motivate users, animating them on the screen during key moments in the workout.

Fitness+ requires an Apple Watch Series 3 or later. The workout videos can be watched on an iPhone, iPad, or Apple TV.

Apple promised that its transition away from Intel processors will take about two years to be completed, and a new report this week outlined what we could expect from future Apple Silicon Macs.

According to Bloomberg's Mark Gurman and Ian King, Apple is working on several successors to the M1 chip for new MacBook Pro and iMac models next year, including designs with as many as 16 power cores and four efficiency cores. And for a future Mac Pro planned for launch by 2022, Apple is said to be testing a chip design with as many as 32 high-performance cores.

Apple is also said to be working on ambitious graphics chips that will feature between 16 and 128 cores depending on the Mac model. These chips could be introduced in late 2021 or potentially 2022.

Useful macOS Big Sur Features You Might Not Know

macOS Big Sur has been out for about a month now, but macOS releases never get quite as much attention as iOS releases, so there may still be some features that you're not aware of. In our latest YouTube video, we rounded up some useful but lesser known ‌macOS Big Sur‌ tips that are worth checking out on the Mac.

Deals: Amazon Has AirPods Max at the Best Price This Year ($429 in Two Colors) [Update: Sold Out]

Thursday December 2, 2021 7:21 am PST by Mitchel Broussard
We've been keeping an eye on AirPods deals in the wake of Black Friday, and before today only the AirPods 3 have seen a return of Black Friday pricing. However, Amazon now has the AirPods Max at their best price of the year of $429.00 in Sky Blue and Space Gray, down from $549.00. Note: MacRumors is an affiliate partner with Amazon. When you click a link and make a purchase, we may receive a...
Read Full Article • 31 comments

Friday July 16, 2021 11:55 am PDT by Mitchel Broussard
AirPods Max have now reached a full $100 off their original price tag of $549.00, available only on Adorama as of writing. You can get all AirPods Max colors for $449.00 during this sale, including Pink, Silver, Sky Blue, Green, and Space Gray. Note: MacRumors is an affiliate partner with Adorama. When you click a link and make a purchase, we may receive a small payment, which helps us keep...
Read Full Article • 89 comments