Bloomberg: Apple Working on Next-Gen Apple Silicon Chips for MacBook Pro, iMacs, and Mac Pro Due to Launch Next Year

Apple is working on a series of new custom Apple silicon processors to power upgraded versions of the MacBook Pro, new iMacs, and a new Mac Pro for introduction as early as next year, according to a new report by Bloomberg.

Apple is said to be working on several successors to the M1 custom chip, its first Mac main processor that debuted in November in a new Mac mini, MacBook Air, and 13-inch MacBook Pro. If they live up to expectations, they will significantly outpace the performance of the latest machines running Intel chips, according to Bloomberg's sources. 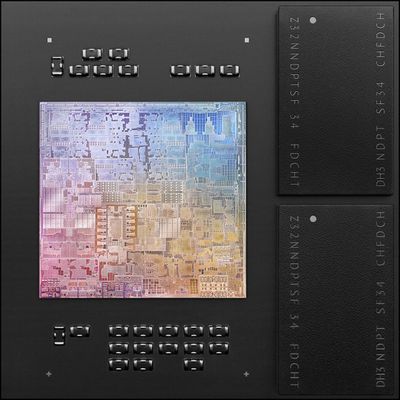 Chip engineers at the Cupertino, California-based technology giant are working on several successors to the M1 custom chip, Apple's first Mac main processor that debuted in November. If they live up to expectations, they will significantly outpace the performance of the latest machines running Intel chips, according to people familiar with the matter who asked not to be named because the plans aren’t yet public.

Apple's M1 chip was unveiled in a new entry-level MacBook Pro laptop, a refreshed Mac mini desktop and across the MacBook Air range. The company's next series of chips, planned for release as early as the spring and later in the fall, are destined to be placed across upgraded versions of the MacBook Pro, both entry-level and high-end iMac desktops, and later a new Mac Pro workstation, the people said.

The next two lines of Apple chips are said to be "more ambitious" than some industry watchers expected for next year, according to the report. Apple expects to finish the transition away from Intel and to its own silicon in 2022.

The current ‌M1‌ chip has four high-performance processing cores and four power-saving cores. For its next generation chip targeting MacBook Pro and iMac models, Apple is said to be working on designs with as many as 16 power cores and four efficiency cores.

Apple is also reportedly testing a chip design with as many as 32 high-performance cores for higher-end desktop computers planned for later in 2021, as well as a new half-sized Mac Pro planned to launch by 2022.

In addition, Apple is said to be developing more ambitious graphics processors. The current ‌M1‌ chip has an Apple graphics engine that comes in either 7- or 8-core variations. For Apple's future high-end laptops and mid-range desktops, the company is reportedly testing 16-core and 32-core graphics parts, with even more powerful custom graphics on the horizon:

For later in 2021 or potentially 2022, Apple is working on pricier graphics upgrades with 64 and 128 dedicated cores aimed at its highest-end machines, the people said. Those graphics chips would be several times faster than the current graphics modules Apple uses from Nvidia and AMD in its Intel-powered hardware.

Apple could still choose to hold back these more powerful chips in favor of lesser versions for next year's Macs, according to Bloomberg's sources. For example, Apple could choose to first release variations with only eight or 12 of the high-performance cores enabled depending on production. The report notes that chipmakers are sometimes forced to offer some models with lower specifications than they originally intended because of problems that emerge during fabrication.

According to Apple analyst Ming-Chi Kuo, Apple is transitioning to mini-LED displays for its Mac lineups next year, meaning some or all of the machines mentioned in today's report could come with the more advanced screens.

haruhiko
Shocker!!! I thought Apple was going to discontinue their M line chips soon. Thanks Bloomberg for telling me this.
/s
Score: 62 Votes (Like | Disagree)

apparatchik
Intel has left the chat, the building and its heading to a cabin in the woods...
Score: 31 Votes (Like | Disagree)

The time for the Mac X is finally coming.

It's the rumored "smaller Mac Pro", which will be considerably cheaper without Intel Tax and the need for hyper-cooling their steampunk Xeons.

I expect a generous $100 discount and the luxury of purchasing a power cable separate, ya know for the environment and all.
Score: 28 Votes (Like | Disagree)

Serban55
Of course...anyone knew this
Score: 28 Votes (Like | Disagree)

spiderman0616
The story is obvious and unnecessary, but what an awesome breath of fresh air for the Mac. Exciting time for Apple hardware.
Score: 23 Votes (Like | Disagree)

KPOM
Nice. The M1 is impressive, but just the beginning.
Score: 22 Votes (Like | Disagree)
Read All Comments