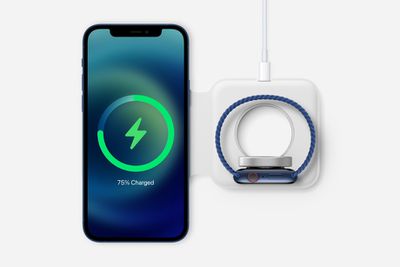 Apple announced the ‌MagSafe‌ Duo during its ‌iPhone 12‌ launch event in October. The charging accessory is vaguely reminiscent of Apple's canceled AirPower charging mat, featuring space to charge both an ‌‌‌iPhone 12‌‌‌ and Apple Watch (but not ‌AirPods‌) at the same time.

Apple hasn't provided specific availability or price details for the charging pad, and it's not yet listed on Apple's online store. Apple's ‌iPhone 12‌ press release simply says that it will be arriving at a "later date."

However, we still have pre-orders to come for the iPhone 12 mini and iPhone 12 Pro Max starting on Friday, November 6, and there is one more Apple event this year on November 10, when Apple is expected to announce its first Apple Silicon powered Macs, so it's not unreasonable to suppose we could see the ‌MagSafe‌ Duo launch around one of these dates, too.

iSayuSay
Of all Magsafe accessories, I am genuinely interested with this one.. Surprisingly useful with Watch/iPhone charging at the same time, then being foldable I can bring it anywhere I go to charge 2 of my most useful Apple devices.

ian87w
Missed opportunity to include a space for Airpods.
Score: 8 Votes (Like | Disagree)

HeavenDynamic
Or maybe even on Friday alongside the pre-orders of the 12 mini & Pro Max.
The leather cases are supposed to be available on the same date.
Score: 6 Votes (Like | Disagree)

If you would have described the $39 MagSafe charger and asked for price estimates before its release, I think you would have seen a lot of guesses in the $59-79 range, and more than a few at $99 or higher. I’m not sure how many would have guessed $39.

Apple could have easily priced the thing at $49 or $59. Pricing it at $39 shows Apple wants to sell a ton of these.

Born Again
Hoping Apple thought this one through. If removing the iPhone from the dual charger lifts up the Apple Watch charger and Apple Watch due to the magnet then fail.

I hope the charging pad is weighed down.
Score: 4 Votes (Like | Disagree)

NMBob
Is that a lightning connector?
Score: 4 Votes (Like | Disagree)
Read All Comments

Sunday February 5, 2023 6:07 am PST by Joe Rossignol
Apple has discussed selling a new top-of-the-line iPhone alongside the Pro and Pro Max models in 2024 at the earliest, according to Bloomberg's Mark Gurman. Based on this timeframe, the device would be part of the iPhone 16 lineup or later. In a September 2022 edition of his weekly "Power On" newsletter, Gurman said there was "potential" for an iPhone 15 Ultra to replace the iPhone 15 Pro...
Read Full Article • 417 comments