Rumors suggest Apple's iPhone 12 launch event will be held on October 13, with the more affordable 5.4 and 6.1-inch devices set to ship out ahead of the more expensive 6.1-inch and 6.7-inch Pro devices, and this morning hit-and-miss leaker Jon Prosser has further committed to that date by providing alleged details on Apple's first shipment of finalized ‌iPhone 12‌ units. 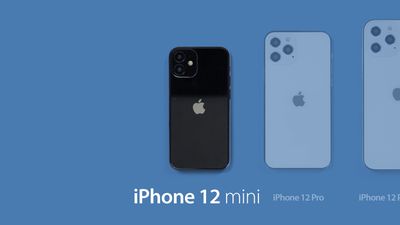 Prosser claims the initial shipment of ‌iPhone 12‌ units will go out to distributors on October 5 in advance of the launch event, and this will include the 5.4-inch ‌iPhone 12‌ "mini" – which he says is "definitely the final marketing name" – and the lower end 6.1-inch ‌iPhone 12‌ model. Prosser asserts that the two higher-end Pro models will be announced at the same event but will ship later in November.

Prosser also claims that the more affordable models will come in 64, 128, and 256GB storage capacities, which conflicts with a claim he made in May that Apple's ‌iPhone 12‌ lineup will start with 128GB of storage. Prosser's explanation for the earlier misinformation is that it was given "well before even the [production validation test] ‌iPhone 12‌ units had started," and in fact it is only the ‌iPhone 12‌ Pro and iPhone 12 Pro Max that will start at 128GB.

Prosser is a leaker with a mixed track record when it comes to Apple's plans. In August 2020, he claimed new Apple Watch and iPad models would be introduced via press releases. In September 2020, Prosser even narrowed down the day of these press releases to Tuesday, September 8, but no products were announced that day. Instead, Apple sent out invites to its "Time Flies" event, where it did introduce new Apple Watch and ‌iPad‌ models a week later.

Earlier this month, however, Prosser was accurate when he said an eighth-generation ‌iPad‌ and a lower-priced Apple Watch model would be unveiled at Apple's "Time Flies" event, but no new iPhones or AirPods Studio headphones.

I have 300 gb of photos and videos in my library.

Move along. Nothing to see here.
Score: 17 Votes (Like | Disagree)

blairh
I store no media on my iPhone. I stream everything and all my pics are neatly organized in Dropbox. 64 GB is more than enough. Some of you need to rethink how you save your media on your iPhone.
Score: 15 Votes (Like | Disagree)

Didn't he said that iOS 14.1 won't be finalized until October 9th?

apple cant change its mind at the final moments? no one is 100% perfect, give him credits for those he got right. if u can do a better job, go for it. stop moping
Score: 14 Votes (Like | Disagree)

NewUsername
“Prosser has aligned himself with proven leaker L0vetodream” -> probably a good idea.
Score: 13 Votes (Like | Disagree)
Read All Comments

Thursday September 9, 2021 7:13 am PDT by Hartley Charlton
The iPhone 13 lineup will offer new Pink, Black, and Bronze colors and storage options will remain the same as the iPhone 12, other than there being no 256GB storage option for the 5.4-inch and 6.1-inch standard models, according to the Ukrainian e-commerce website "KTC," spotted by 91mobiles, that purports to have revealed the upcoming devices' configuration options. MacRumors' render of ...
Read Full Article • 301 comments