Apple's upcoming iPhone-centric event could perhaps be held on Tuesday, October 13, according to information shared with MacRumors by an employee at a UK cellular carrier. 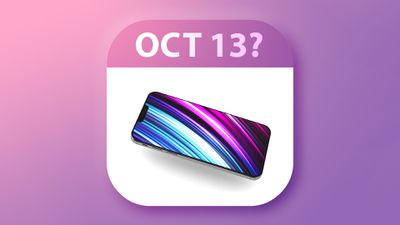 There's no way for us to confirm the dates at this point in time nor are we sure on the credibility of the source, but even without a rumor, Tuesday, October 13 is a good guess based on Apple's historic launch timelines, preference for Tuesday launches, and penchant for holding events during the second week of the month.

The employee claimed that Apple would accept pre-orders directly after the event and launch the new iPhones on October 16, but that would be an unusually short time between the event and the launch date. It's quite possible that the source is confusing the pre-order and launch date timelines, with pre-orders actually set to happen on the 16th. If that's the case, a launch would logically follow on October 23, and that's what other sources have suggested.

The October 13 date has also been shared by AppleInsider in a report sourcing information from a Dutch mobile operator, and Jon Prosser, a leaker with a mixed track record when it comes to Apple's plans, also claims the event will take place on October 13 followed by pre-orders on the 16th and a launch on the 23rd.

If there is an October 13 event followed by an October 23 launch, we may not see all of the new iPhone 12 models at the same time. Rumors have suggested that we should expect a staggered launch with some iPhone models coming out in October and others coming out at a later date, perhaps in November.

It's likely that the 5.4 and 6.1-inch low-cost iPhones will be available first in October, followed by the Pro models at a later date due to supply and production constraints. There's some confusion over this point, however, as DigiTimes has suggested Apple could release the two 6.1-inch ‌iPhone‌ models (one low-cost and one Pro) ahead of the 5.4-inch ‌iPhone 12‌ "mini," as it is rumored to be called, and the 6.7-inch iPhone 12 Pro Max.

With the prospective October 13 date less than three weeks away, we could be seeing event information and invites from Apple within the next week or so.

It's worth noting that Amazon's Prime Day is rumored to be on Tuesday, October 13, which would be a notable conflict, so there's still a possibility that the October 13 Apple event date is inaccurate.

OriginalMacRat
Meanwhile, reading this article exposes you to the 11 sites tracking you via MacRumors.
Score: 44 Votes (Like | Disagree)

koil
My wallet is ready.
Score: 23 Votes (Like | Disagree)

Pearple
I was at the parking lot at McDonalds in Cupertino. I saw Phil in his SUV while he was speaking into his iPhone, he actually was yelling "we just have 12 days" and "we need space fuc..... grey" ... I'm not sure but I guess release will be on October 4th...
Score: 17 Votes (Like | Disagree)

apparatchik
I dont think Apple would (re-) schedule an event depending on wether it collides with “Prime day” or not, which last time I checked is not an official holiday but an arbitrary private sale...
Score: 11 Votes (Like | Disagree)
Read All Comments