Ahead of Apple's "Time Flies" virtual event on Tuesday at 10:00 a.m. Pacific Time, well-connected Bloomberg journalist Mark Gurman has been sharing some last-minute thoughts via Twitter on the new product announcements that he expects to see later today, with a particular emphasis on new Apple Watch models. 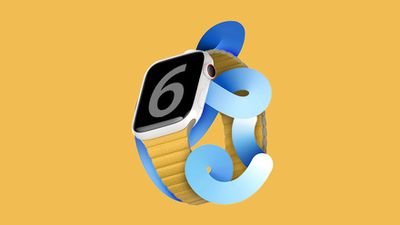 Gurman has already said his broad expectations for Tuesday's event are a focus on a new Apple Watch Series 6 and iPad Air, with Apple likely to introduce its rumored iPhone 12 at a later event in October.

As for Apple Watch, Gurman has tempered expectations for the Apple Watch Series 6, saying that he "wouldn't look for a ton new" besides blood oxygen monitoring and a faster processor. We already know sleep tracking will be included in watchOS 7, but whether that will be twinned with better battery life or a fast-charge capability is still speculation at this point.

Moving on, Gurman personally believes a new lower-end Apple Watch model also rumored to be announced today will be called "Apple Watch SE," which is the same branding that proven leaker Evan Blass used in his latest tweet about what to expect from Apple at the upcoming event.

Both the Apple Watch Series 6 and ‌Apple Watch SE‌ are expected to come in the same 40mm and 44mm sizes, with the SE model said to be the same as the current Series 5 in terms of design and internal specifications, according to Gurman. Blass predicts both models will also come in both LTE and Wi-Fi versions.

As for the new ‌iPad Air‌ model expected to be introduced, Gurman says it features a similar all-screen design as the iPad Pro but will lack the ProMotion display and won't feature Apple's latest A-series processor.

For his part, Blass reckons the forth-generation ‌iPad Air‌ will have an A14 processor and USB-C connectivity, but he also predicts Apple will unveil an eighth-generation iPad with an A12X chip and a Lightning port.

Lastly, Gurman reiterates his expectation for Apple One service bundles to be announced on Tuesday, along with a new Apple fitness service, but a new Apple TV model remains delayed. Gurman has not mentioned any specific announcement date for Apple's rumored Tile-like AirTags accessory, unlike hit-and-miss leaker Jon Prosser, who believes an announcement is "likely" to come on Tuesday.

The release of new iPads and Apple Watch models corresponds with the rollout of iOS 14, iPadOS 14 and watchOS 7 software updates, which are expected to have their official public release this month.

Yixian
If the entire event is literally just Apple Watch and iPad air without finally showing airtags or AirPod studios or a small HomePod etc etc then it will be immensely.. immensely disappointing.
Score: 16 Votes (Like | Disagree)

Kylo83
We get it, tonight’s event won’t be interesting
Score: 10 Votes (Like | Disagree)

No way the ipad air will be the first A14 device....100% its non-sense
The first device based on 5nm A14 will be the iphone, and ipad pros will get maybe the A14X and the macbook
Score: 10 Votes (Like | Disagree)

Harrycooke
I’ve been waiting to upgrade my Apple Watch and tbh if Blood Oxygen is the only new thing, I’d be better off going for the SE depending on the price.
Score: 8 Votes (Like | Disagree)

UltraInstinct
Are we expecting the "Apple Watch SE" to come in stainless steel and aluminium? Just aluminium? Plastic? Isn't it supposed to be $199, don't see basically a S5 being sold for that low.
Score: 5 Votes (Like | Disagree)

Apple Watch SE, I can believe. Apple needs more market share for the direction they are going.

They need to get <£200 to compete with fitbit and other lower priced fitness trackers.
Score: 5 Votes (Like | Disagree)
Read All Comments