The dispute between Apple and Epic Games continued to be all over the news this week, but we also saw an interesting leak that claims an upcoming revamped iPad Air will incorporate Touch ID into the power button. 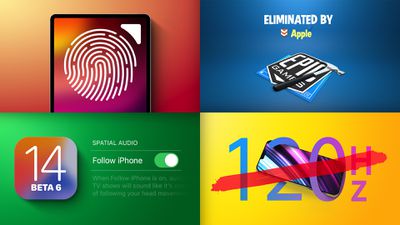 Other news this week included a fresh beta of iOS 14 with a few more tweaks as Apple begins finalizing things and tightening up the beta release cycles, more iPhone 12 rumors, a big stock payday for Tim Cook, and our thoughts on Samsung's latest Galaxy Note20 and what features we'd like to see Apple adopt in future iPhones.

Read on below for details on those stories and more from the past week!

While these photos could certainly be photoshopped, there are no obvious signs that they have been faked. The rumor also lines up with reputable analyst Ming-Chi Kuo's prediction that Apple plans to release a new iPhone SE with a Touch ID power button in the first half of 2021.

Timing remains a question mark. Apple filed a lengthy list of unreleased iPad and Apple Watch models in a Eurasian database this week, signaling that new devices are on the horizon, but rumors have been conflicting as to whether the iPad Air 4 will be a fall 2020 or spring 2021 product.

According to leaker Jon Prosser, Apple plans to introduce at least some new iPad and Apple Watch models via press release in September, followed by new iPhones at a (presumably virtual) event in October.

Judge Sides With Apple on Fortnite, Epic on Unreal Engine

U.S. District Judge Yvonne Gonzalez Rogers this week decided not to force Apple to put Fortnite back on to the App Store, but she did grant a temporary restraining order that prevents Apple from terminating Epic Games' access to developer accounts tied to its Unreal Engine game engine for developers. A final decision on an injunction will be made in September.

In a statement, Apple maintained that "Epic's problem is entirely self-inflicted," adding that would "will gladly welcome Fortnite back onto iOS" if Epic resubmits the app without a direct payment option for V-Bucks, which violates the App Store guidelines and is what prompted this legal battle.

Epic Games confirmed that the new season of Fortnite will not be available to players on iPhone, iPad, or Mac at this time due to the legal proceedings, a decision that prevents cross-platform play. Epic also emailed Fortnite users on Apple's platforms to alert them to the issues, blaming Apple for the situation.

With Epic remaining unwilling to remove the direct payment option, Apple followed through on its previous statements on Friday and terminated Epic's developer account tied to Fortnite, the previous Infinity Blade franchise, and other titles. For the latest developments in this case, read our Epic Games vs. Apple timeline.

Apple this week seeded the sixth betas of iOS 14 and iPadOS 14 to developers for testing purposes, updating and refining some features.

As the beta testing period progresses, changes have started to become smaller and less notable. The sixth beta still has some minor tweaks and feature additions worth mentioning though, including a new toggle switch for an upcoming Spatial Audio feature on AirPods Pro.

We've also shared a list of hidden or lesser-known features worth checking out in iOS 14, complete with a video.

In other software news, Apple seeded the first beta of iOS 13.7, which introduces the ability to opt-in to COVID-19 exposure notifications prior to downloading an app that supports the functionality. The sixth betas of watchOS 7 and tvOS 14 were also made available this week.

Rumors continue to conflict as to whether iPhone 12 Pro models will launch with a "ProMotion" display that would allow for a variable refresh rate up to 120Hz.

Display analyst Ross Young this week said that he expects iPhone 12 models to remain limited to 60Hz, but he added that the company could theoretically postpone the launch of the devices slightly to secure necessary components for a "ProMotion" display like recent iPad Pro models have.

Leaked screenshots, if real, suggest that Apple has at least explored the idea of implementing 120Hz support on iPhone 12 Pro models.

In other iPhone 12 rumors, we learned just how much faster the A14 chip should be, that the devices may have a simpler battery board design, and that Apple appears to be set on shipping the devices without a charger or EarPods in the box, leaving only a Lightning to USB-C cable.

We're going to do an in-depth comparison when the iPhone 12 comes out, but for now, we thought we'd take a look at the new Galaxy Note20 to highlight some of its best features that Apple should adopt.

Apple CEO Tim Cook was recently awarded 560,000 shares of Apple stock as a reward for his tenure as CEO and the company's strong performance under his leadership relative to the S&P 500.

Apple became the first U.S. company to achieve a $2 trillion valuation this month, and its stock price has also surpassed the $500 mark at times. Apple recently announced a four-for-one stock split that took effect for shareholders of record as of August 24, with split-adjusted trading to begin on August 31.

I still cannot understand what spatial audio is...

BaltimoreMediaBlog
I don't think I will buy another iPhone until Apple can figure out Touch ID underneath the screen as others have already.

I liked when Apple was a forward technology company, not stuck in their ways. With COVID issues with Face ID, even Steve Jobs would have admitted the mistake and fixed it by now.
Score: 4 Votes (Like | Disagree)

I don't think I will buy another iPhone until Apple can figure out Touch ID underneath the screen as others have already.

I liked when Apple was a forward technology company, not stuck in their ways. With COVID issues with Face ID, even Steve Jobs would have admitted the mistake and fixed it by now.

Agreed Face ID is a huge PITA right now. I won’t buy another phone that doesn’t have a fingerprint sensor again. It’s not just the lock screen it’s all of the apps that use Face ID too, everything is now so tedious to use in public.

Not that Apple could have seen a worldwide pandemic coming when they came up with it, but they need an alternative for their upcoming products.
Score: 2 Votes (Like | Disagree)

ELand-SX70
I still cannot understand what spatial audio is...
Score: 2 Votes (Like | Disagree)

I still cannot understand what spatial audio is...

Normal earbuds have left and right speakers that play different channels of audio to give the impression that an audio source is more to the left or right of you. If both channels play the same sound, the audio doesn't feel like it's coming from any particular place relative to the listener.

If you want to augment this experience, you need more speakers. Home theaters might have "surround sound" which involves adding speakers behind and in front of the viewer, so sounds can also come from behind and ahead. But how do you do that with earbuds, which only have two speakers?

Spatial audio gives the impression that audio is coming from anywhere in space by varying the volume of audio channels as you turn your head. It uses gyroscope data to determine where your head is facing relative to your phone. Then it plays a sound louder in one ear as that ear gets closer to where it would be in the video shown on your phone.