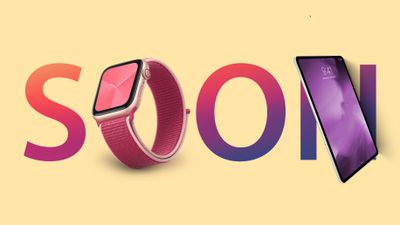 The Apple Watch filings follow previous model identifiers, with the A2375, A2376, A2355, and A2356 likely being cellular models, and the A2291, A2292, A2351, and A2352 being GPS-only models. These likely encompass the upcoming Apple Watch Series 6. Apple Watch Series 6 parts were spotted in database filings earlier this month, and the new models are expected to feature blood oxygen monitoring.

It is unlikely that the split is the result of filing the same ‌iPad‌'s cellular and WiFi-only models separately, as is the case with the Apple Watch filings. The two iPads may be updated iPad Pro models and redesigned iPad Air models, both of which have been rumored to arrive next month.

Earlier this month leaker Jon Prosser suggested that new Apple Watch and ‌iPad‌ models will launch in September, with the iPhone 12 event set to take place later in October. The filings effectively confirm that the release of new ‌iPad‌ and Apple Watch models is imminent.

That makes more sense, since the iPad Pro was updated just a few months ago.

They can’t really update any of the iPads without updating the Pros first though. Think about it - the Pros are still sporting an A12 based chip from 2018 (currently marketed at the A12Z, but it’s still the exact same chip that shipped with the 2018 Pros, just with an extra GPU core unlocked). The Air also has an A12 chip (the less powerful version from the iPhone) but upgrading it to an A13 or A14 would make the Pros look old and inferior. The iPad is still using an A10 and I could easily see it jumping up to an A12, but not before the Air gets updated to something better than the A12... therefore in my opinion updating the Pros needs to be the first step in refreshing the iPad lineup.
Score: 10 Votes (Like | Disagree)

omenatarhuri
Might finally buy a watch this year. Been thinking about since version 1 lol
Score: 6 Votes (Like | Disagree)
Read All Comments