Apple CEO Tim Cook yesterday testified in front of the U.S. House Judiciary Antitrust Subcommittee where he was questioned on Apple's App Store policies, but Congress also released a series of emails that Apple had submitted as part of the ongoing antitrust investigation. 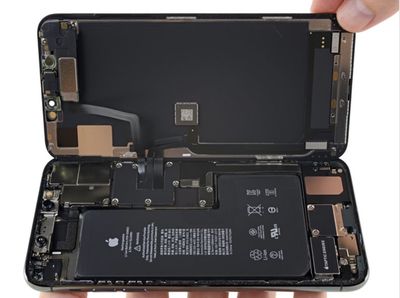 Image via iFixit
Those emails revealed Apple's thoughts on App Store fees and provided insight into its efforts to negotiate deals with Amazon, but there were also emails on other topics, including the ongoing Right to Repair battle that Apple has been fighting against independent repair shops.

For those unfamiliar with Right to Repair, it's legislation that mandates that consumers should be able to repair their own devices, and that electronics companies like Apple should provide repair parts and repair manuals to all repair shops, rather than just Apple Authorized Service Providers.

Apple has lobbied heavily against Right to Repair, but internally, emails suggest Apple has been uncertain about its position and how it wants to handle repairs in the future. As an example, Apple scrambled to figure out its narrative when The New York Times in April 2019 wrote an op-ed in favor of the movement.

"The larger issue is that our strategy around all of this is unclear. Right now we're talking out of both sides of our mouth and no one is clear on where we're headed," reads the email.

An internal Apple email on repair shared with the subcommittee
Later in 2019, iFixit discovered iMac repair manuals online and questioned Apple about it. iFixit received no response, but according to the emails shared with Congress, it sparked internal discussion. From an email between Apple PR execs:

Right now, it's pretty clear things are happening in a vacuum and there is not an overall strategy. Plus, with one hand we are making these changes and the other is actively fighting Right to Repair legislation moving in 20 states without real coordination for how updated policies could be used to leverage our position."

As it turned out, Apple released the ‌iMac‌ manuals for the EPEAT green certification standard, and not all teams at Apple were aware those manuals were being uploaded nor was everyone in favor of it. Apple did not ultimately remove the manuals, but has not posted further repair instructions online.

Multiple states have introduced Right to Repair legislation, but lobbying from Apple and other companies like John Deere has prevented it from passing. Apple continually cites customer safety as the reason why repairs need to be restricted.

In fact, to persuade California lawmakers not to pass Right to Repair legislation, Apple's lobbyists took apart an iPhone and explained how customers could harm themselves if the lithium-ion battery is punctured. Apple has also said that it wants to assure customers that their products will be "repaired safely and correctly," as the reasoning behind not opening up repairs to all repair shops.

Even as it fights Right to Repair legislation, Apple has been making some moves to attempt to appease those pushing for expanded repair access. Apple in August 2019 introduced an Independent Repair Provider Program that provides independent repair businesses with genuine Apple parts, tools, training and repair manuals, but it does require repair shops to sign onerous contracts to get access.

iFixit does, of course, heavily advocate for Right to Repair policies so the piece on Apple's uncertainty over how to handle the shifting demand for access to repairs is somewhat biased, but the full article is worth a read for those who are interested in better access to repairs.

LawJolla
Right to repair is an obvious step. For the "what happens when..." crowd, one need to look no further than cars. OEMs authorize franchises to repair their vehicles, but any other number of unauthorized shops can also do the repairs. The OEMs make the parts and knowledge available to everyone to facilitate the free market.

Would anyone like to revert to the model where only BMW authorized shops can touch a BMW?
Score: 31 Votes (Like | Disagree)

Who will be responsible for a badly repaired phone or when something stops working after home repair? What if the device has been sold to a buyer that didn't know it was repaired by the owner?
I like to have the right to repair, but what should incapable people have the right to do?

What is the difference between a car? Should we make it illegal to repair our own car at home because we want to protect our customers? That sounds insane.
Score: 27 Votes (Like | Disagree)

Does anyone honestly believe Apple should be in the hook for anything if a home repair does not work out?

Look, I can fix my car at home and still take it to a dealership. Same thing. If I messed it up, Apple will charge me extra to fix my screw up. Simple. Stop trying to make it illegal to work on our own purchased items.
Score: 27 Votes (Like | Disagree)

katbel
Competition has always been good, monopoly not so much
Once we were able to open a computer and upgrade ram (some iMac lets you still do it), change internal HD etc
Great times!
Score: 22 Votes (Like | Disagree)

It's not illegal to fix your phone, just as the car. It's not the legality that I am worried about. It's the people that think they can do this after one Youtube video.

Apple was trying to pass a bill in California trying to make it illegal to fix your phone yourself. What are you talking about. Dude, Apple is hella shaddy for that. They are not on the customer side.

Eh wrong. People buy second hand cars all the time. Check craiglist. Those cars have been worked on by regular people.
Score: 18 Votes (Like | Disagree)

quagmire
I do not buy the, " We do not want people to do the repair themselves for their own safety" line.

I can buy the line of protecting customers by making sure only Apple parts are used in repairs. But the solution is then to make the parts available to repair shops. But then the issue becomes customers will always go for the cheapest solution. Repair shop, " You want OEM parts? That will be a $150 repair. We can do it for $80 if you want to use generic parts." The customer will then opt for the $80 charge then you have a suspect knockoff battery in the phone.
Score: 17 Votes (Like | Disagree)
Read All Comments