Apple on Right to Repair: We Want Customers to Be Confident Their Products Will Be 'Repaired Safely and Correctly'

Right to Repair advocates continue to lobby the U.S. government, arguing that large tech companies like Apple are monopolizing repairs of consumer electronics in order to preserve profits, reports Axios. 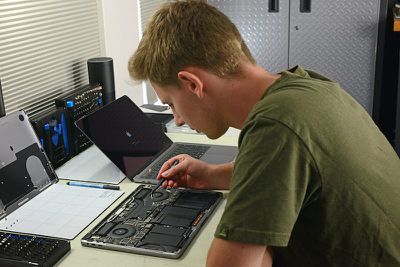 Similarly, in a letter submitted to the subcommittee last month, The Repair Association's executive director Gay Gordon-Byrne wrote that "manufacturers have no reasons for blocking repair other than money," referring to the "monopolization of repair" as a "huge profit opportunity."

In March, California became the 20th state to introduce Right to Repair legislation in the U.S., according to iFixit. Apple representatives have continually opposed these bills, which if passed would require companies to make repair parts, tools, and documentation available to the public.

In a statement, an Apple spokesperson told Axios that Apple's goal is to ensure its products are "repaired safely and correctly," while touting the company's growing network of Apple Authorized Service Providers:

We want to make sure our customers always have confidence their products will be repaired safely and correctly, and in a way that supports recycling. We are continually growing our network of certified technicians and most recently announced that any Best Buy store in the U.S. is now an authorized service provider.

Apple Authorized Service Providers have access to certified parts and service guidelines from Apple. There are over 1,800 of these authorized locations in the United States, which Apple said is "three times as many locations as three years ago." As of June, that includes every Best Buy store in the country.

Right to Repair legislation aims to make these parts and documentation available to independent shops and customers directly.

Packdude
I'm a fan of the Apple products that I own, but this is a load of bs. If the repair is not repaired 'correctly', that's between the consumer and the repair shop. Places that do bad repairs will become known as such and people will avoid them. In the mean time, places that do good repair work will save consumers thousands of dollars every year, which is money that wouldn't go to Apple, hence why they don't want anyone else repairing the hardware they make.
Score: 79 Votes (Like | Disagree)

markfc
Sure Tim, Just send the link to where I can order genuine Apple Parts at a fair price and I'm good. :-)
Score: 73 Votes (Like | Disagree)

FamVR
Apple must have missed the videos from Louis Rossmann.

I had an iPhone repaired by Apple and later ran into issues...turned out that two screws where missing.
Score: 46 Votes (Like | Disagree)

HardRain
It's obvious why they are doing it, just wish Apple would be honest about it, sick of all the hypocrisy. From slowing down devices, to non upgradable Macs, its all about profit, which is fine, but just stop pretending its for the consumers.
Score: 39 Votes (Like | Disagree)

MotorMikey
Ensure it’s repaired “safely and correctly”… right.
While I don’t disagree, if people are allowed to repair their cars - objects that weigh thousands of pounds and transports people at high speeds - then yeah, it’s not unreasonable for a person to expect to be able to replace the battery on their phone.
Score: 32 Votes (Like | Disagree)

Siannath
I love Apple products but they are being greedy ****s and Louis Rossmann is right about Apple in repair issues.

I hope a strong Right to Repair legislation is effective soon.

Also, Apple wants to sell the image of being a eco-friendly company... but replacing things is not eco-friendly. Repairing things is.
Score: 32 Votes (Like | Disagree)
Read All Comments