Apple is fighting Right to Repair initiatives in California by telling lawmakers that consumers could hurt themselves attempting to repair their own devices, reports Motherboard.

Over the course of the last few weeks, an Apple representative and a lobbyist for ComTIA, a trade organization representing major tech companies, have been meeting with legislators in California with the aim of killing right to repair legislation that would make it easier for customers to repair their own electronics. 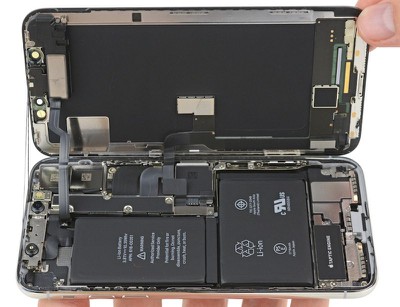 Image via iFixit
The pair have met with members of the Privacy and Consumer Protection Committee, which held a meeting on a right to repair bill this afternoon. Apple told lawmakers that customers could potentially injure themselves by accidentally puncturing the batteries in Apple devices during attempted repairs.

The lobbyists brought an iPhone to the meetings and showed lawmakers and their legislative aides the internal components of the phone. The lobbyists said that if improperly disassembled, consumers who are trying to fix their own iPhone could hurt themselves by puncturing the lithium-ion battery, the sources, who Motherboard is not naming because they were not authorized to speak to the media, said.

Apple has continually lobbied against right to repair legislation across multiple states. Such legislation would require companies like Apple to provide repair parts, tools, and make repair information available to the public.

"We know that all across the country, millions of people are doing this for themselves. Millions more are taking devices to independent repair technicians," he said.

Quu
Ridiculous. This right to repair law isn't just about consumers being able to repair their own products it's about repair shops that don't want to be affiliated with Apple being able to obtain parts to do repairs on the behalf of consumers.

And I want to also add, I changed the battery in my own MacBook Pro 15" - The kind that is glued in. Really wasn't that difficult, consumers aren't as thick as Apple wishes they were.
Score: 127 Votes (Like | Disagree)

kwikdeth
when this article is posted immediately after the article headlining a 30% YOY decline in iPhone sales, its pretty easy to understand the motivation behind Apple's actions in this regard.
Score: 82 Votes (Like | Disagree)

sevoneone
This is getting ridiculous. People have been repairing and maintaining their own cars for nearly a century. Crawling under a 1- to 2-ton hunk of steel and aluminum and having it come crashing down on you is a lot more dangerous than poking a hole in a LiIon or LiPo battery and having it put on a light and smoke show...
Score: 80 Votes (Like | Disagree)

Victor Mortimer
Oh yeah, it's all about $afety.

I really hope Apple fails at this blatant attempt at a cash grab, not only is right to repair good for consumers, it's good for the environment. A repaired device or computer is one that isn't discarded or sent to India or China for "recycling" - where it's burned in the open air to extract the metals.
Score: 52 Votes (Like | Disagree)

Ridiculous. This right to repair law isn't just about consumers being able to repair their own products it's about repair shops that don't want to be affiliated with Apple being able to obtain parts to do repairs on the behalf of consumers.

And I want to also add, I changed the battery in my own MacBook Pro 15" - The kind that is glued in. Really wasn't that difficult, consumers aren't as thick as Apple wishes they were.

THIS! I popped open my 2011 MacMini the other day, and even though I'd never done it before, I removed the thermal paste and replaced it. I also added and SSD and now the computer is perfectly suitable as a media center to hook up to my TV. If it was up to Apple I would have had to buy a severely overpriced new Mac Mini...
Score: 48 Votes (Like | Disagree)
Read All Comments