Apple once considered taking a 40 percent cut from some subscription apps, according to documents shared today by the House Judiciary Committee (via Bloomberg). 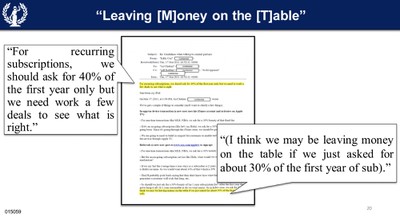 Back in March 2011, Apple's services boss Eddy Cue emailed three other executives and suggested Apple should "ask for 40% for the first year only," but that a "few deals" needed to be worked out for Apple to "see what is right."

One of the executives, Jai Chulani, wrote back that Apple could be "leaving money on the table" asking for 30 percent in the first year of subscriptions.

At the time, the emails referred to apps that offered digital content like Hulu on the Apple TV rather than apps running on iPhone and iPad, though Apple had launched App Store subscriptions in February 2011.

Apple CEO Tim Cook during his testimony at today's antitrust subcommittee meeting emphasized that Apple has not changed its ‌App Store‌ fees since the ‌App Store‌ launched, and has in fact lowered them, referencing the 15 percent cut.

Ahead of the antitrust meeting, Apple also commissioned a study suggesting Apple's ‌App Store‌ fees are in line with the fees collected by other digital marketplaces and service providers.

Can I ask you to explain how you came to that judgement? What makes 30 so much more acceptable than 40? Why not 25? Why not 60? Are you just drawing an arbitrary line in the sand because it's what we're used to, or is there some calculation you've run here?
Score: 58 Votes (Like | Disagree)

because it's the industry standard that Sony, Nintendo, and Microsoft has adopted with their stores.

But it's the industry standard in part because that's where Apple set it. If they had originally been debating between 40% or 50%, would you be arguing that 40% is perfectly fair but not 50?
Score: 21 Votes (Like | Disagree)

japanime
Amazon takes up to 65 percent (yes, you read that right) from independent publishers of books sold through the Kindle store.

I'm not suggesting that by "only" taking 30 percent (or 40 percent) is by any means fair. But Amazon is getting away with highway robbery.
Score: 21 Votes (Like | Disagree)

Apple_Robert
Much ado about nothing, seeing how that did not come to fruition. Not sure why it is story worthy 9 years after the suggestion.
Score: 19 Votes (Like | Disagree)

LN3000
I don't see how this is really much of a story. One person suggesting something doesn't mean it reflects company values. I could suggest Mickey Mouse becoming president, but that doesn't mean all of America wants Mickey Mouse to be president (although....)
Score: 13 Votes (Like | Disagree)