Apple offered Amazon lower App Store fees to convince it to launch its Prime Video app on the ‌App Store‌ and Apple TV, documents published by the U.S. antitrust subcommittee have revealed.

According to email correspondence between Apple's services chief Eddy Cue and Amazon CEO Jeff Bezos, Apple struck a deal to bring Amazon Prime Video into the ‌App Store‌ by agreeing to take a 15% revenue share of subscriptions signed-up through the app. Apple usually takes a 30% share of all ‌App Store‌ subscription revenue, dropping to 15% only if the subscription continues for a second year. 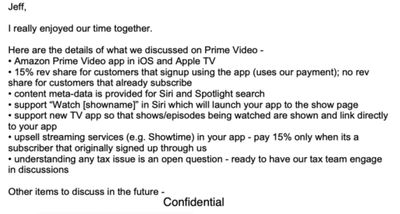 Image credit: Mark Gurman
In 2016, when the meeting took place, Amazon Prime Video wasn't available on ‌Apple TV‌, which competes directly with Amazon's Fire TV. At the time, Bezos admitted that Amazon was holding out for "acceptable business terms" from Apple to include its service on Apple's set-top box. It's unclear if the reduced subscriptions cut was part of the final terms of the agreement.

According to the email, Apple also agreed to take a 15% share of third-party Amazon Channels sold through the app if the subscriber used Apple payment processing, agreed to support integration with Siri and pipe in Prime Video content to its TV app for iOS, and agreed to include Prime Video results in ‌Siri‌ and Spotlight searches. A year after the email was sent, Amazon Prime Video launched on ‌Apple TV‌.

Other documents shared by the committee also reveal correspondence between Apple and Amazon regarding the 2018 deal for Apple to officially sell devices on Amazon's website. Bloomberg notes that the documents show Amazon expected to bring in $3.2 billion from the deal in the first year, including $1.1 billion from iPhone sales.

However, the antitrust subcommittee interpreted the deal as representing preferential treatment given to Amazon and that Apple was not treating its developers equally when it came to providing access to its ‌App Store‌ and other platforms. "That is not correct," Cook said on Wednesday when asked by the subcommittee if some developers are treated differently. "We treat every developer the same."

PaulpBenitti
It is quite the conundrum isn't it?

On the one hand it's just a normal deal being made between 2 businesses.

On the other hand, its anti-competitive behavior being engaged in by 2 monster companies.

It is both, at the same time. There is nothing wrong with it, and there is everything wrong with it. It is bizarre how normal business is not acceptable anymore when you become too big, but that's how it is.
Score: 32 Votes (Like | Disagree)

Infinite Vortex
And who covers that 15% offset that Amazon get (and I'm sure others)… the small developer that doesn't get a break where the rules are followed in an unforgiving, seemingly mean spirited, way. And at the end of the day its the consumer that is the one that always pays for it all!
Score: 22 Votes (Like | Disagree)

HylianKnight
I feel like a lot of people missed this short blurb in the article about Apple fee policy for subscription-based video apps...

It was easy to miss, and probably should have been mentioned a bit sooner.
Score: 19 Votes (Like | Disagree)

Builders merchants, if a builder comes if and buys more bricks then anyone else he gets a bigger discount then anyone else, same all over.
Score: 16 Votes (Like | Disagree)

jayducharme
This seems like a damned-if-you-do-damned-if-you-don't situation. If Apple hadn't allowed Amazon into their ecosystem, Apple would have been charged with anti-competitive practices. But Apple worked out a deal, brought Amazon on board and allowed customers more choices, and they're accused of being anti-competitive.
Score: 12 Votes (Like | Disagree)

Rogifan
This is not surprising but it does show Tim Cook is lying when he says all developers are treated the same.
Score: 10 Votes (Like | Disagree)
Read All Comments