The Apple Watch Series 6 will feature an OLED screen like previous models, according to a leaker of upcoming Apple products, suggesting the company isn't quite ready to use its in-house MicroLED display technology in consumer products. 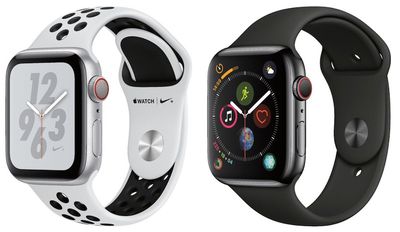 Apple reportedly has a secret manufacturing facility in Santa Clara, California where it is designing and producing test samples of displays that use MicroLED, a technology that will follow OLED. MicroLED screens can result in devices that are slimmer, brighter, and use less power.

However, the Twitter account @L0vetodream, whose short Apple leaks come prefaced with "in my dream," this morning claimed the Series 6 "will continue [to] use the display from JDI."

Over the last couple of years, JDI Display has supplied some of the OLED displays for Apple Watch models, and Apple has been gradually increasing its proportion of orders from the manufacturer, which was recently buoyed by a $200 million investment from Apple to enable larger production of OLED displays for iPhones.

Apple Watch Series 6 models, which are in development for a fall 2020 launch, are rumored to feature faster performance, better water resistance and improved wireless transmission for faster Wi-Fi and cellular speeds.

According to code found in a leaked version of iOS 14, Apple is working on watchOS 7 and Apple Watch Series 6 features that will allow the Apple Watch to detect blood oxygen levels and panic attacks. Apple may also add a new fitness app and a sleep tracking app to the Apple Watch.

The anonymously-run Twitter account @L0vetodream accurately revealed several details about the new ‌iPhone SE‌ before any other leakers that we know of, including that the device would launch in the second week of April and come in three storage capacities. Likewise, the account accurately claimed that new iPad Pro models would launch in the third week of March. It has also hinted at a 2021 release for a rumored 14-inch MacBook Pro.

Apple Watch needs to last 24hrs without charging before I will consider ever getting one.

Mine does. The times when I've forgotten to switch it over to my nighttime watch I've still had over 30% battery left the next morning, if not significantly more.
Score: 16 Votes (Like | Disagree)

lambertjohn
I have a Series 4 and it does everything I want it to do. All I want with a Series 6 is for it to be thinner.
Score: 6 Votes (Like | Disagree)

Without the new display, it’s very unlikely that I will upgrade. The Apple Watch needs at least 2 more hours of battery life for sleep tracking, and it’s unlikely they will get there with the same display.

I don't know why the display's battery consumption would matter when you're sleeping and the display is supposed to be completely turned off.
Score: 6 Votes (Like | Disagree)

newyorksole
Every year Apple Watch gets better and better. The rumored upgrades for this year sound great even without new display technology.
Score: 6 Votes (Like | Disagree)

what microLED?? you are confused, microLED is the next BIG thing, and for now microLED are only in BIG TV...so how do you know that are power hungry?? and thick??
ahhahahah
microLED are invented to take only the adv from lcd and oled and without any disav from them
miniLED is just another lcd, just more advance
Score: 4 Votes (Like | Disagree)

EvilEvil
Apple Watch needs to last 24hrs without charging before I will consider ever getting one.
Score: 4 Votes (Like | Disagree)
Read All Comments

Monday January 24, 2022 9:20 am PST by Juli Clover
AT&T today announced the launch of upgraded AT&T Fiber plans, which support speeds of up to 5 Gigabits for some customers. There are two separate plans, one "2 GIG" plan and one "5 GIG" plan, available to new and existing AT&T Fiber subscribers. According to AT&T, the new plans are available to nearly 5.2 million customers across 70 metro areas including Los Angeles, Atlanta, Chicago, San...
Read Full Article • 210 comments

Monday January 24, 2022 7:12 am PST by Sami Fathi
Three months after their launch, the 14-inch and 16-inch MacBook Pros continue to experience high demand and seemingly short supply, with shipping dates for both models stretching into multiple weeks in several of Apple's key markets. In the United States, the baseline 14-inch MacBook Pro with the M1 Pro chip is estimated to ship in three to four weeks, promising an arrival by at least...
Read Full Article • 178 comments