Apple Developing Its Own MicroLED Displays for Future Devices

Apple has a secret manufacturing facility in Santa Clara, California, where it is designing and producing test samples of its own displays, reports Bloomberg. The company is reportedly using MicroLED technology in an effort to replace Samsung's OLED displays in future devices. 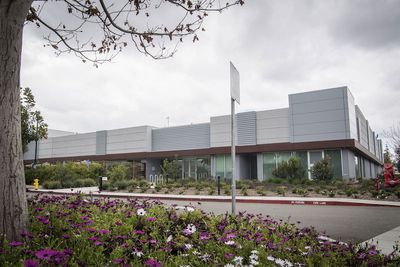 The technology giant is making a significant investment in the development of next-generation MicroLED screens, say the people, who requested anonymity to discuss internal planning. MicroLED screens use different light-emitting compounds than the current OLED displays and promise to make future gadgets slimmer, brighter and less power-hungry.

Apple's desire to expand its supply chain beyond Samsung has been extensively rumored, with Apple reportedly spending billions of dollars to help LG get its own OLED production up to speed and LG displays rumored to be making their way into this year's "iPhone X Plus" device.

Looking beyond OLED, many believe MicroLED will be the next display technology to appear in mobile devices, and Apple's interest in the technology was revealed in its acquisition of MicroLED firm LuxVue back in 2014. Apple has reportedly been working to first bring MicroLED to the Apple Watch, with some rumors pointing to that happening as soon as this year.

Bloomberg's report suggests, however, that it will likely be a few years until Apple's MicroLED displays will appear in shipping products, perhaps two years for the Apple Watch and three to five years for the iPhone. Apple will likely also outsource full-scale production of the displays.

The California facility is too small for mass-production, but the company wants to keep the proprietary technology away from its partners as long as possible, one of the people says. “We put a lot of money into the facility,” this person says. “It’s big enough to get through the engineering builds [and] lets us keep everything in-house during the development stages.”

Apple had reportedly been working on MicroLED display technology at an R&D center in Taiwan, but late last year the company was reported to have scaled back its efforts at that center. In light of today's news, it's possible Apple elected to concentrate its efforts at a facility closer to its headquarters.

Yeah but can microLED individually turn off per pixel, offering extreme contrast and crushing deep blacks?

Expect to see more of this. Apple's competitive advantage will increasingly be hardware-based and in order to maintain that advantage they need to develop hardware that their rivals can't copy.

Except Samsung have a head start on MicroLED. They showed off a 146” MicroLED TV this year and have reported to have their mobile screen variations well under development.

Given Samsung’s history of pushing display technologies in the mobile space well before others, I wouldn’t be surprised to see MicroLED in a Galaxy device first. After that it will be the usual pissing match of who does it better.
Score: 22 Votes (Like | Disagree)

Except Samsung have a head start on MicroLED. They showed off a 146” MicroLED TV this year and have reported to have their mobile screen variations well under development.

Given Samsung’s history of pushing display technologies in the mobile space well before others, I wouldn’t be surprised to see MicroLED in a Galaxy device first. After that it will be the usual pissing match of who does it better.

It wasn't really microled, why? because it was 146 fracking inches. Got that. Samsung was blowing smoke.
a microled display would have been 14 inch with the same resolution.
Yeah, Samsung are bS artists.
Score: 11 Votes (Like | Disagree)

smallcoffee
Expect to see more of this. Apple's competitive advantage will increasingly be hardware-based and in order to maintain that advantage they need to develop hardware that their rivals can't copy.
Score: 9 Votes (Like | Disagree)

Yeah but can microLED individually turn off per pixel, offering extreme contrast and crushing deep blacks?

If Apple can pull this off, it should mean better quality at a lower end cost (at least I hope so).

But who's gonna manufacture it on a large scale? Is Apple finally prepared to actually build a factory to build a part of their devices?

All the billions in the world, yet they still rely on others making parts.
Score: 8 Votes (Like | Disagree)
Read All Comments