A leaked version of the iOS 14 update has been circulating for a few months, giving us an idea of what Apple is working on behind the scenes for the new update.


Details about iOS 14 have been trickling out, and today, Josh Constine (formerly of TechCrunch) has shared leaked Apple QR codes, details about Apple's work on an AR app, and sounds for the upcoming Apple Tags in his Moving Product newsletter.

Apple appears to be implementing a new QR code format that uses colored cones, with the files found in the "Gobi" AR app that Apple has been working on. Constine says QR codes open up Mac Pro and Apple Watch websites, the Star Wars: Rogue One movie in iTunes, and the Starbucks Card sign-up. 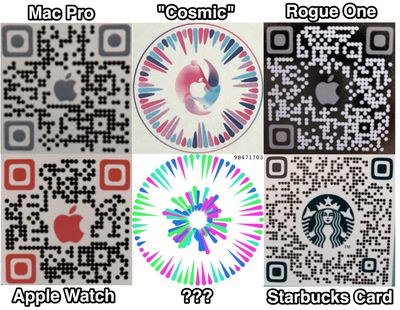 The code also featured references to a Gobi comparison shopping feature that could be in the AR app, and, in line with previous rumors about a possible Starbucks partnership, there were references to Starbucks discounts at specific locations, which suggests the Gobi app could offer promotions or content experiences based on location.

A video shared by Constine also features sounds and vibrations that will be used in the Find My app to help people locate their lost devices. As described by Constine:

You'll hear encouraging sounds when you face the right direction so the lost gadget is "Ahead" of you, when you're "Nearby", or come within "Arms Reach", while discouraging tones hint that you're headed off course.

Many other leaked features have been found in iOS 14, such as hints of a new fitness app, new features for Messages like mentions and retractions, new Apple Pencil features, Home screen updates, ‌Find My‌ changes for AirTags, the CarKey API that will allow an iPhone to be used in lieu of a CarKey, and tons more, with full details available in our iOS 14 roundup.

WannaGoMac
How about iOS 14 fix Mail app so i dont have to refresh every time i open it for the email to be delivered?

You'll hear encouraging sounds when you face the right direction so the lost gadget is "Ahead" of you, when you're "Nearby", or come within "Arms Reach", while discouraging tones hint that you're headed off course.

Bonus points if it can have a giggly kids voice saying, “you’re getting warmer” and such.
Score: 6 Votes (Like | Disagree)

I'm wondering if we'll be able to sync photos from macOS to iOS in the next release. That would be an amazing feature that used to work up until iOS 13 and macOS 10.15!

That feature has never stopped working for me.
Score: 5 Votes (Like | Disagree)

QR codes, almost as pointless as Emoticons and Animojies.

Well if they’re being used commercially like at Starbucks it’s perfect. Easy to set up and no maintenance so it works consistently at all locations.
Score: 3 Votes (Like | Disagree)

How about iOS 14 fix Mail app so i dont have to refresh every time i open it for the email to be delivered?

I know, crazy high expectations. Lets go back to emoji and QR codes