As discovered in the first beta of iOS 13.4, Apple is working on a new "CarKey" feature that will allow an iPhone or an Apple Watch to unlock, lock, and start NFC-compatible vehicles. 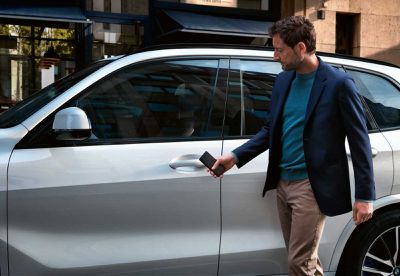 CarKey "keys" live in the Wallet app and as we found in the first beta, can be shared with other people so you can allow others temporary access to your car. In the second beta of iOS 13.4, there's updated wording concerning sharing, which makes it clear that digital car keys will be able to be sent to people using the Messages app.

CarKey keys will be able to be shared with people in individual conversations but not in group conversations. From iOS 13.4 beta 2:

Sharing a CarKey with someone will allow that person to use their ‌iPhone‌ or Apple Watch to access a compatible car by holding the device near an NFC reader located inside of the vehicle. Keys can be permanent (for a spouse) or temporary (for a valet driver or mechanic).

People who receive a digital key over the Messages app will see text letting them know how it works.

[Vehicle Owner] invited you to use their [Vehicle Model] with unlock & drive access. This allows you to use your iPhone and Apple Watch to unlock/lock the car, start the engine and drive.

CarKey access, like Apple Pay and Apple Cash, is authenticated biometrically using Face ID or Touch ID to make sure the person holding the ‌iPhone‌ is the person with permission to access a car, though there is an "Express Mode: that would presumably work without the need for authentication.

Apple is a member of the Car Connectivity Consortium (CCC), which has developed an NFC-based Digital Key 2.0 specification made available at the end of 2019. The new specification establishes a secure connection between mobile devices and vehicles over NFC.

The CCC is also working on a Digital Key 3.0 specification based on Bluetooth Le and Ultra Wideband, enabling passive location-aware keyless access. Apple's ‌iPhone‌ 11, 11 Pro, and 11 Pro Max support Ultra Wideband, so this is CarKey functionality we could see in the future.

There is no word yet on when CarKey will be announced by Apple or when it will start rolling out to new vehicles, but a launch could come with the public release of iOS 13.4.

With Apple rumored to be holding an event on March 31, the CarKey announcement could be made at the event as we expect iOS 13.4's release to coincide with the debut of new devices.

calzon65
This is a feature I will defiantly try. Get rid of that huge key fob.
Score: 8 Votes (Like | Disagree)

swm
i love the idea, but i can't neglect the fact that hijacking one's iCloud account gets more and more lucrative for criminals...
Score: 6 Votes (Like | Disagree)

trizzil
doing this with my tesla
Score: 5 Votes (Like | Disagree)

Uh, don't do that. What about a dead phone?

its not a problem.
similar to the Express Transit card that you can use for transportation, after your battery signals its run out, and other normal phone functions don't work, there is a Power Reserve function that allows the key to still work for up to 5 hours.
Score: 4 Votes (Like | Disagree)

This is a feature I will defiantly try. Get rid of that huge key fob.

Huge key fob? I’m not sure what kind of car you have, but I’m actually impressed with how small these key fobs are today in terms of weight/slimness given all their core functionality.

also, there’s something about the overall weight of a key fob that I like, but it feels substantial, But that’s just me appreciating the little things.
Score: 4 Votes (Like | Disagree)

This is a feature I will defiantly try. Get rid of that huge key fob.

Eh, I would rather just try it normally. I see no reason to be defiant about this. :p
Score: 3 Votes (Like | Disagree)
Read All Comments