With Apple's new 13-inch MacBook Pro now out the door and there still being about six weeks until WWDC, much of the Apple news this week focused on rumors. We heard new information about larger displays for Apple's cheaper iPad models, the so-called Apple Glasses, and Apple's high-end "AirPods Studio" headphones.

Subscribe to the MacRumors YouTube channel for more videos.
Other rumors included new upcoming colors for Apple's Powerbeats Pro lineup, a timeframe for the 14-inch MacBook Pro, and details on the iPhone 12 Pro, while we also saw a major update to Apple's Logic Pro X audio editing software. Check out the video above and read on below to catch up on this week's biggest stories!

Apple analyst Ming-Chi Kuo was back at it this week with new details about upcoming products over the next two years. First, he expects new 10.8-inch iPad and 8.5-to-9-inch iPad mini models to launch in the second half of 2020 and the first half of 2021, respectively. Like the new iPhone SE, Kuo believes these iPad models will be more affordably priced and equipped with the latest generation A-series chips. 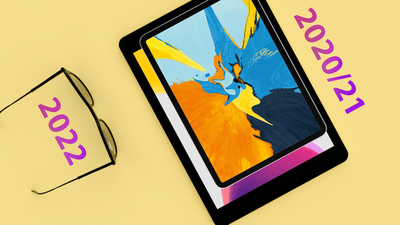 In line with other reports, Kuo also expects that so-called Apple Glasses will launch in 2022 at the earliest and offer an innovative augmented reality experience. Apple is believed to be working on two different head-worn products, including a bulkier headset and a thinner and sleeker pair of glasses.

Jon Prosser, who has shared a number of accurate or corroborated rumors in recent months, differs a bit from Kuo when it comes to timing, however, as he says the glasses are currently "aimed for March–June 2021."

Apple's rumored high-end over-ear headphones will be called AirPods Studio and retail for $349, according to leaker Jon Prosser. A separate report this week claimed that the headphones will feature head and neck detection and custom equalizer settings with low, medium, and high frequency adjustments available.

Earlier this month, Apple refreshed the 13-inch MacBook Pro with a more reliable Magic Keyboard, faster 10th-generation Intel processor options, up to 80 percent faster graphics performance, up to 32GB of RAM, double the storage on standard configurations, and more.

Apple ended up sticking with the same size display when it refreshed the 13-inch MacBook Pro with a Magic Keyboard and faster processor options earlier this month, but a 14-inch model might still be on the table.

An anonymous Twitter account with a fairly accurate track record this week suggested that the 14-inch MacBook Pro will launch at some point in 2021.

Apple analyst Ming-Chi Kuo previously said that Apple plans to release at least six Mini-LED products by the end of 2021, including both 14-inch and 16-inch MacBook Pro models. Altogether, these rumors could suggest that a 14-inch MacBook Pro with Mini-LED backlighting will be released at some point next year.

iPhone 12 Pro models will feature a ProMotion display, allowing for a variable refresh rate of up to 120Hz for smoother motion content and greater responsiveness, according to leakers Max Weinbach and Jon Prosser. The feature debuted on the iPad Pro in 2017.

On the contrary, display analyst Ross Young has claimed that low-power LTPO backplane technology is essential for the iPhone to support ProMotion, as it would allow for a variable refresh rate as low as 1Hz to preserve battery life. Young does not expect Apple to adopt LTPO on iPhones until 2021, and thus he does not expect the iPhone to support ProMotion until next year.

Apple this week announced the release of Logic Pro X version 10.5 with a new Live Loops feature first introduced in GarageBand for iPhone and iPad, a completely redesigned sampling workflow, new beat-making tools, and many other new features.

Live Loops allows users to organize loops, samples, and recordings into a new musical grid. From there, tracks can be further refined using all of the professional production features in Logic Pro X. Remix FX enhances Live Loops with a collection of electronic effects that can be performed in real time over individual tracks or the entire song mix.

VPRunner
I love these roundups. Keeps reminding me of all the things my wallet wants to buy! Come on 14” MBP!
Score: 3 Votes (Like | Disagree)

44267547
I definitely think there’s a lot of potential for Apple headphones for a 2020 Release. I recently made my selection with Sony/Audio technica, but if these proved to be on par with at least with the Sony WH-1000XM3, then I’ll be on board for a possible Purchase.

[Also, hopefully we see the ‘Apple tags‘ launch this year as well. That’s another product with huge potential.]
Score: 1 Votes (Like | Disagree)

Putzytart
I suspect a lot of updates will be held off for the new ARM machines next year like a new mini-led 14 inch ARM MBP. Might even be no updates to the iMac until then either. Let’s just get through this year already!
Score: 1 Votes (Like | Disagree)
Read All Comments