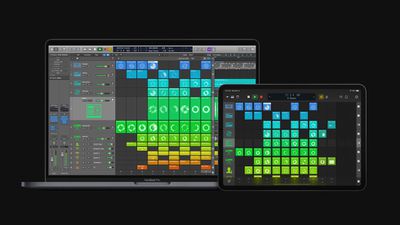 Live Loops allows users to organize loops, samples, and recordings into a new musical grid. From there, tracks can be further refined using all of the professional production features in Logic Pro X. Remix FX enhances Live Loops with a collection of electronic effects that can be performed in real time over individual tracks or the entire song mix.

A free companion app called Logic Remote allows users to pair an iPhone or iPad with their Mac to control and perform Logic Pro X features and instruments. Logic Remote is receiving a major update today to allow triggering of sounds in Live Loops, browsing and adding loops, and applying Remix FX to a session. The app is free on the App Store.

Logic Pro X has also received performance improvements, over 2,500 new loops in a variety of instruments and genres, and more, with Apple referring to version 10.5 as the "biggest update to Logic since the launch of Logic Pro X."

• Compose music by arranging and triggering cells in a grid using loops, samples, and your recordings
• Perform and capture freeform arrangement ideas into the tracks area
• Add Remix FX to perform creative effects like filters, gates, repeaters, and bitcrusher
• Use Logic Remote on your iPad or iPhone to perform Live Loops and Remix FX using Multi-Touch gestures to trigger several loops or effects simultaneously

• Import a single audio file to instantly build a playable sampled instrument
• Quick Sampler automatically identifies the root note, optimal loop points, and matches your project tempo
• Use Slice mode to chop a vocal or drum sample into multiple slices that can be triggered on a keyboard
• Record live samples using a microphone, external hardware, or from any track or bus

• Build your own beats, melodies and effect automation using an interface inspired by classic drum machine workflows
• Create and edit patterns with discrete control over velocity, repeat, chance, offset, step rate, skip and tie for each row
• Use any patch as a sound source, including custom kits made with Quick Sampler and Drum Machine Designer
• Includes a library of over 150 rhythmic and melodic patterns

Logic Pro X can be purchased from the Mac App Store for $199.99, with a 90-day trial available. Version 10.5 is available today as a free update for all existing users.

Jungo
I paid 199 for logic SIX years ago now... and here is yet another FREE update - LOVE it

has anyone seen the list to the all changes page over at apple ?
Score: 6 Votes (Like | Disagree)

What is the iPad doing there? Sidecar or is it also coming to iPad?

This has to be one of Apple's best value products by far, particularly when compared to Pro Tools or Ableton.

Sunday February 5, 2023 6:06 am PST by Hartley Charlton
A new version of the Mac Studio with the "M2 Ultra" chip is unlikely to arrive in the near future, according to Bloomberg's Mark Gurman. In the latest edition of his "Power On" newsletter, Gurman explained that since the upcoming Apple silicon Mac Pro is "very similar in functionality to the Mac Studio," Apple may wait until the release of M3- or M4-series chips to update the machine, or...
Read Full Article • 514 comments

Tuesday February 7, 2023 5:38 am PST by Tim Hardwick
Apple has reportedly considered releasing a new top-of-the-line iPhone alongside future Pro and Pro Max models, tentatively referred to as "iPhone Ultra," and one designer has taken it upon himself to envision what such a device could potentially look like. German industrial designer Jonas Daehnert came up with this impressive-looking concept (pictured) by marrying design elements of the...
Read Full Article • 155 comments