Apple is planning to introduce new Powerbeats Pro models in an array of bright, spring-themed colors that include cloud pink, glacier blue, spring yellow, and lava red, according to a rumor sourced from a Weibo account (via iMore). 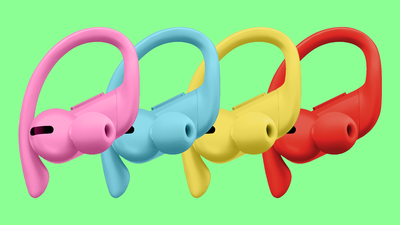 The rumor comes from WaveTech, a source without a known track record for sharing accurate info about Apple's plans, but the wide attention the rumor has garnered leads us to believe the information could potentially be correct.

First introduced in April 2019, the ‌Powerbeats Pro‌ are currently only available in black, ivory, moss, and navy, all of which are plainer, more subdued colors, so the brighter color options will be a welcome update.

Apple often adds new Beats headphones options in updated colorways, offering a range of seasonal color options for products like the Beats Solo and Studio headphones, so it's no surprise to see new ‌Powerbeats Pro‌ color options being made available.

There were rumors earlier this year that suggested Apple would debut ‌Powerbeats Pro‌ 2 earbuds, but regulatory documents suggest that the "‌Powerbeats Pro‌ 2" are just a minor refresh with an internal tweak that changes the model number.

It's likely that the new model numbers will be associated with the ‌Powerbeats Pro‌ that are being released in the new spring colors, though there may also be minor internal tweaks to the updated ‌Powerbeats Pro‌.

MrGimper
Sponsored by the Tele Tubbies
Score: 17 Votes (Like | Disagree)