During the first quarter of 2020, Apple's wearables category set a new all-time revenue record, according to Apple CEO Tim Cook.

Apple's wearables earnings category, which includes AirPods and Apple Watch along with accessories like Beats headphones and HomePod, hit $10 billion, up from $7.3 billion in the year-ago quarter. 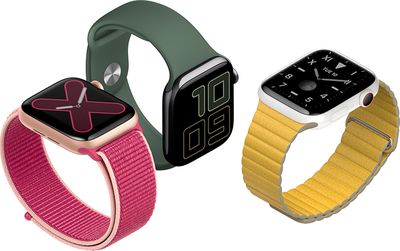 Wearables, Home, and Accessories revenue surpassed Mac revenue for the first time this quarter. Mac revenue was at $7.2 billion in Q1 2020.

According to Apple CEO ‌Tim Cook‌, Apple could not make enough AirPods and Apple Watch Series 3 devices to meet demand during the quarter, and supplies continue to be low. Cook told Reuters that Apple is "working on both of those very hard."

Cook says that Apple's wearables business is now the size of a Fortune 150 company.

windowsblowsass
Wearables are now producing more revenue per quarter than all of Apple did pre iPhone.
Score: 7 Votes (Like | Disagree)

rosegoldoli
The Apple Watch is such a fun device and extremely useful and can have longevity for a couple of years. Anyone who doesn’t have one yet should check it out
Score: 5 Votes (Like | Disagree)

Anonymous Freak
Amazing to think that 20 years ago, essentially 100% of Apple's revenue was from Mac. (Plus accessories, services as tiny amounts.)

While it's a pretty safe bet that without the iPod, iPhone, etc, Apple wouldn't have had the same computer sales growth, even if they *ONLY* sold Macs, they'd still be about 4x better off than 20 years ago.
Score: 5 Votes (Like | Disagree)

mistasopz
When the apple watch first came out, there were many reported issues with janky/incorrect measurements on people that had arm hair. For those users that have Robin-Williams type arm hair, can you comment on if it has improved? There's no way I'm going to shave my wrist for a watch.
Score: 4 Votes (Like | Disagree)

Doctor Q
I'm disappointed by the declining percentage of Mac revenue, since it's the product that I depend on most.

I think of the headline as Apple's Mac Category Sets Record in Q1 2020, Failing Against Wearables for the First Time.
Score: 2 Votes (Like | Disagree)

That's cool, and I'm a happy stockowner. I'm also happy that Apple replaced my Walkman, my camera, my calculator, my radio, etc, and finally my iPod (and my watch!) with a $800 smart phone. But I simply don't like the design. It looks... girly. [Note: this is my subjective opinion and everyone is entitled to their own equally valid opinion.]

Changing bands will make a big difference in that.
Score: 2 Votes (Like | Disagree)
Read All Comments