Tuesday November 19, 2019 11:19 am PST by Juli Clover
Apple this fall partnered with 100cameras, a nonprofit organization that aims to teach photography to adolescents, providing participating students at DRW College Prep in Chicago with the new iPhone 11.

100cameras teaches the students how to use photography to tell their own stories about growing up in Chicago, using the ‌iPhone 11‌ to capture photos. Angela Popplewell, 100cameras' co-founder, said that students were excited to use the new ‌iPhone 11‌, and it was "incredible" seeing how they used the wide-angle and Portrait modes to "really capture their point of view." 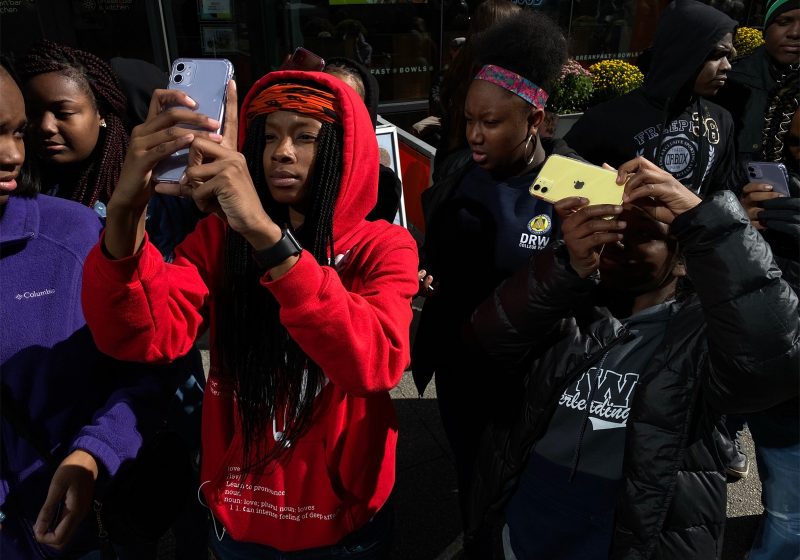 "As the residents of a neighborhood in Chicago that is often overlooked, being given the new iPhone that had been released just a few weeks prior felt like a momentous opportunity," says Angela Popplewell, 100cameras' co-founder and CEO. Earlier this year, Popplewell, 100cameras' director of program operations Lydia Billings and the team started contemplating how their curriculum could be adapted to be more forward-thinking, relevant and accessible for young people in the US. ForPopplewell and her team, the new ‌iPhone‌, with its built-in sophisticated camera features, was an important tool.

Apple's vice president of ‌iPhone‌ Worldwide Product Marketing Kaiann Drance said that it was "amazing" to collaborate with 100cameras on the project.

"It was amazing to collaborate with 100cameras and the talented and creative students at DRW," said Kaiann Drance, Apple's vice president of ‌iPhone‌ Worldwide Product Marketing. "The ‌iPhone 11‌ camera with all its intuitive capabilities right there in your hand is such a powerful storytelling tool. To see the photos the students captured of the ways they see the world around them was truly inspiring."

Following each program, the photos that students have captured are sold through 100cameras with 100 percent of the proceeds going back to the local community partner organizations that 100cameras visits.

Some of the photos captured by students

Additional photos captured by the students can be seen in Apple's newsroom article on the initiative.


Translation: "This is actually a good thing and I can't find a legitimate reason to complain about it but I love complaining so I'll just accuse them of virtue signaling!"
Rating: 16 Votes

ignatius345
Wow. Apple is teaching kids how to use the $1000 phones they sell to take photos. [slow clap]
Rating: 10 Votes

JoeInMilwaukee
How about teaching kids math, reading, etc. instead of photography?
Rating: 6 Votes

Unfortunately I don't think anyone can become a good photographer using an iPhone.


I think the ability to become a good photographer starts with surprisingly enough, a camera. Practically, ANY camera :) Absolutely NONE of the great photographers today started out life with a camera grafted to their palms. There are a few who started out with a FANTASTIC expensive piece of kit as their very first camera, but the majority of them scraped by with whatever they could afford. And, back then, what they could afford was likely far worse at capturing images than current camera technology, whether it’s an iPhone, and Android or a point-and-shoot.
Rating: 6 Votes

How about teaching kids math, reading, etc. instead of photography?


Why do you think one excludes the other?
Rating: 4 Votes

If they did something relating to their customer base interests, but not explicitly about their product, that would sound a bit less like an advertisement.

But it is just a publicity stunt.
Rating: 3 Votes

Unfortunately I don't think anyone can become a good photographer using an iPhone.
A great photographer can make great pictures with an iPhone, but he surely didn't learn his craft on a point & shoot smartphone


You can learn to be a great photographer using most any camera - the learning/teaching is the important part. Lots of people who are great photographers started with mediocre cameras. The important part with the program described in this article is that there's some instruction involved. They could have gone with some other camera (say some $200 point-and-shoot), but Apple happens to have a supply of iPhones handy, so... Yes, plus, it makes nice advertising for Apple. If companies get positive PR for doing good things, I'm okay with that.
[automerge]1574197165[/automerge]


Well....because of Apple, we now have "pro" cell phones. So i would say that attempting to re-brand photography with an apple on it is consistent with the company's current direction.