Apple in late October released a new 13.2 software update for the HomePod with a bunch of new features, but it turned out the update was bricking some HomePods.

Apple addressed the bug in an updated 13.2.1 software release a couple days later, making the new functionality available without the risk of ruining a ‌HomePod‌. In our newest YouTube video, we go over all of the new ‌HomePod‌ features for MacRumors readers who may have been put off by the bug reports.

With the new update, ‌HomePod‌ can distinguish between different users in the household, introducing multi-user support for the first time.

Siri is able to tell who is speaking, allowing each person in the home to access their own selection of music, playlists, radio stations, and preferences. 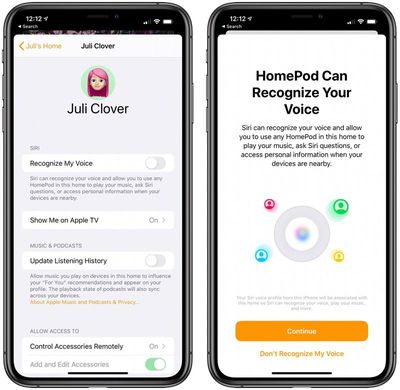 Setting up multi-user support requires a device running iOS 13.2 or later, and you need to invite your family members to be a member in the Home app. From there, open the Home app, choose Home Settings, tap on your user profile under people, and then turn on the "Recognize My Voice" option.

Apple has more info on setup in a dedicated support document.

If you're listening to a song on your iPhone and want to transfer it over to your ‌HomePod‌, you can do so with iOS 13.2.1's new Handoff feature.

Handoff works with the Apple Music app, podcasts, phone calls, and more. If you don't want to use the feature, you can turn it off in the Settings app by going to General > AirPlay > Handoff and toggling off "Transfer to ‌HomePod‌."

When creating or editing a HomeKit scene, you can now add songs from your ‌Apple Music‌ Library. You can, for example, create a "Good Morning" or "Relax" scene that does things like change the lighting and start a song playing on ‌HomePod‌.

Just select the "‌HomePod‌" option when creating a scene under the list of accessories. From there, choose the "Play Audio" option and then select "Choose Audio" to select a song.

The 13.2.1 update also introduces a neat new feature called Ambient Sounds, which is designed to let you ask Siri to play relaxing sounds like rain, white noise, and more.

There are seven different options that you can choose from:

To use Ambient Sounds, just ask ‌Siri‌. Asking ‌Siri‌ to play Ambient Sounds will select a random sound, but you can also ask for a specific sound with a command like "Hey ‌Siri‌, play rain sounds."

Ambient Sounds can be set up with a sleep timer so that the noise automatically turns off after a set period of time. When an Ambient Sound is playing, ask ‌Siri‌ to set a sleep timer for a set amount of time.

"Hey ‌Siri‌, set a sleep timer for 45 minutes," for example, will play the ambient noises for 45 minutes before the ‌HomePod‌ turns off.

If you don't want to listen to Ambient Sounds, this also works with any music that happens to be playing.

Downloading the new ‌HomePod‌ software can be done by opening up the Home app, selecting "Home Settings" after tapping the house icon in the upper left corner, and choosing the "Software Update" option. If the "Install Updates Automatically" feature is turned on, your ‌HomePod‌ has likely already updated to 13.2.1.

TheMountainLife
I'm with @goobot on bluetooth should be accessed by the user. Funny how my guests and their partners can come to my house and cast whatever they want to my Sony TV or Apple TV. But homepod? Nope. Bose with the Alexa/Google integration solved that issue for me.

I never understood the disdain for having options and then when somethings clearly missing, uninformed unofficial answers are made to why instead of saying..."Yeah why not have both options as there are many users out there with different setups".

The excuses made for bluetooth range are ridiculous. I've been to many events, holiday and house parties where a tablet or phone was playing music over bluetooth and was never a problem.
Score: 3 Votes (Like | Disagree)

Forcing you to use Apple device to play music.

That is hardly greed. The same is true for the Apple Watch.
Score: 3 Votes (Like | Disagree)

That is hardly greed. The same is true for the Apple Watch.

You insinuate that because someone used an iPhone to set up a HomePod that it’s the only device they would ever want to use on it. Something like a HomePod (speakers) is a devices used by an entire family and very often is used by friends. A “smart” speaker that can only be used with a handful of devices isn’t that smart. Also plenty of Apple users use Spotify or would want to use music that they purchased rather than be forced to just stream a service. All of this indicates greed because Apple wants no one but Apple users to be able to use the HomePod. An android user with music purchased from iTunes can’t play that music on HomePod. iPod was Mac only originally, it was vastly more popular when it came to windows.
Score: 3 Votes (Like | Disagree)

puggsly
No worries! There are plenty of things Apple doesn't do that I wish they would (why did you kill back to my mac) but I don't ascribe other motivations beyond their vision is different than mine unless I Know better. Also, you had some misinformation about needing to be on the wifi network to stream to a HomePod. I don't see that changing your mind but don't want to spread bad info ether.

Two questions:
- does voice recognition prevent someone from having access to personal information like text messages and calendar?

- how do you switch phone calls or music from one HomePod to another, if you move to a different room?

Yes and no! It is not designed as a security feature so if someone can fake the sound of your voice they could still access that data as long as your device was nearby. So practically it does but this is not secure biometrics. As for the calls, you would probably have to pull it back to your phone and drop it to the other HomePod.
Score: 3 Votes (Like | Disagree)

Handoff is my favorite feature on the HomePod right now. When playing a song, waving my iPhone transitions the song over to the HomePod seamlessly. Also works for phone calls too.


Did you enable the setting in Settings>General>AirPlay & Handoff? It was disabled by default when I updated my iPhone.

Yes :( Thank you for caring.

Edit: I disabled and enabled this setting and now it is suddenly working. Or is it because you have to shake the iphone? I never tried that before... happy now ?
Score: 3 Votes (Like | Disagree)
Read All Comments