Kuo: 'iPhone SE 2' Entering Mass Production in January and Launching at the End of March

Apple's "iPhone SE 2" is scheduled to go into mass production in January 2020 and will launch at the end of March, according to the latest information from reliable Apple analyst Ming-Chi Kuo. 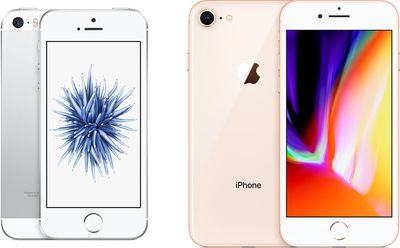 The timing basically tallies with Kuo's previous reports on the so-called "‌iPhone SE‌ 2," in which he predicted a Q1 2020 release for the device, which is expected to start at $399.

Relying on historical patterns in Apple's product release schedule to predict future launches is not without risk, but March has traditionally been the launch month of Apple's more affordable iPhone.

The original ‌iPhone SE‌ was announced on March 21, 2016, pre-orders began on March 24 and the device was officially released on March 31, 2016. It was re-released almost a year later on March 24, 2017 with larger storage capacities. Apple has also held special launch events in the last week of March for the last two years.

Specs for the new low-end ‌iPhone‌ are said to include:

Kuo expects the device to look similar to the ‌iPhone‌ 8 and believes it will be a popular upgrade option for existing ‌iPhone‌ 6 and ‌iPhone‌ 6S owners, serving as a "key growth driver" for Apple in 2020. He believes these customers have low desire for new features like Face ID and multiple cameras, suggesting the "‌iPhone SE‌ 2" will stick with Touch ID and a single-lens rear camera.

According to other industry sources, LG is in talks with Apple to supply LCD displays for the successor to the ‌iPhone SE‌, with the panels currently undergoing last-minute quality checks.

Of course, "‌iPhone SE‌ 2" might not be the final name of the device, with ‌iPhone‌ 8s and ‌iPhone‌ 9 speculated as other possibilities. With a larger 4.7-inch display, the device won't be as portable as the original ‌iPhone SE‌, which will surely disappoint fans of that model.

Roscorito
One last appeal Tim before you enter mass production. Its not that we want cheap, we want small! You’ve got the iPhone pro, how about the iPhone mini? I’ve hung on to my SE because I like to go running without a brick in my pocket.
Score: 46 Votes (Like | Disagree)

CouponPages
Hey Apple. Some people don't like a big phone. Give us a smaller option.

To me the best option would simply be physical size of the current SE, but with a screen that extends to the edges, like the current lineup.

The thing that boggles my mind over the years is why screen size should have such a big relationship to price. Price differences between the display panels do not vary that much by size, yet traditionally any device including laptops with a bigger screen are much more expensive.

A 13" MacBook Pro starts at $1299, yet 15" starts at $2399 because they have entirely different specs. Why can't they offer the same specs with just small differences for display preferences?

The bottom line... Why not just build the same specs, but offer 3 sizes (small, medium, large)?
Score: 16 Votes (Like | Disagree)

MoreRumors?
Ok, stop calling it a SE2 and call it what it really is, 8s. I think this will sell very well for those not wanting to spend a lot on a phone. For me, 128GB is the sweet spot.
Score: 13 Votes (Like | Disagree)

ruka.snow
iPhone 6 is way too big. I really hope Apple have clicked on that there is demand for a smaller full feature phone at any price. Amazingly smaller sized humans exist.
Score: 11 Votes (Like | Disagree)

GuruZac
On a side note, you guys all begging for an even smaller phone, full featured may in fact get your wish, as rumors have the iPhone 12 Pro smaller at 5.4” next year with an even larger iPhone 12 Pro Max at 6.7”. A full screen 5.4” phone would be even smaller than the iPhone 6/7/8.
Score: 8 Votes (Like | Disagree)

One last appeal Tim before you enter mass production. Its not that we want cheap, we want small! You’ve got the iPhone pro, how about the iPhone mini? I’ve hung on to my SE because I like to go running without a brick in my pocket.

I'm also frustrated at this trend towards bigger and bigger phones. Back in September 2018, when the iPhone SE stopped selling, I penned the following letter to Tim Cook ('https://f000.backblazeb2.com/file/michaelahlers-public/iphone-se-open-letter/index.html'). Most of these go ignored, but I've updated it and maybe it's worth sharing for others to submit, as well.

Thank you in advance for taking the time to read my letter.

Over more than a decade, I've purchased for myself and family dozens of Apple products, including desktops, laptops, phones, and accessories to match. Apple's industry-leading design and craftsmanship inspire intense brand loyalty, and I enthusiastically take every opportunity to recommend your company's products for both professional and personal uses. While I've routinely applauded Apple's willingness to shed legacies from its products in pursuit of exciting new features, I remain disappointed by the iPhone SE's elimination from Apple's lineup.

The market clearly demands phones with big displays, and it is, of course, reasonable Apple should eagerly supply that demand. But for myself and—I'm inclined to believe—millions of others the iPhone SE is nearly perfect in its form and function. Its aesthetics are attractive. It can be gripped comfortably and operated with one hand. It fits easily in a pocket.

I have tried one of Apple's larger phones (an iPhone 6s) and found its form factor awkward, and returned it after a week. I couldn't get used to it. Having owned almost every iPhone model from the original up to the SE, I haven't wanted for much more besides updated processor and memory specifications. With Apple now only offering what I feel are miniature tablets, I'm suddenly reliant on a dwindling aftermarket supply of my favorite device.

As you've observed in your September 2018 keynote address ('https://apple.com/in/apple-events/september-2018/'), our phones are integral parts of our lives, and you've expressed Apple's desire to serve everyone with the iPhone. Such a personal device needs to fit well with an individual's needs, and I sincerely hope you'll reconsider serving this segment of the market. We're not customers clamoring for a lower price, just a smaller device.

Tuesday January 24, 2023 1:11 pm PST by Joe Rossignol
While the new Mac mini with the M2 chip has a lower $599 starting price, the base model with 256GB of storage has slower SSD read and write speeds compared to the previous-generation model with the M1 chip and 256GB of storage. A teardown of the new Mac mini shared by YouTube channel Brandon Geekabit reveals that the 256GB model is equipped with only a single 256GB storage chip, while the...
Read Full Article • 609 comments