The first beta of iOS 13.2 brought a handful of changes like Deep Fusion support, Announce Messages With Siri and HomePod handoff options, but iOS 13.2 beta 2 introduces even more significant changes.

There are new emoji and new Siri privacy settings as we outlined earlier today, but there are also some other smaller changes worth highlighting.

- Rearrange Apps - The "Rearrange Apps" option that pops up when 3D Touching or using a Haptic Touch on an app icon is now "Edit Home Screen." 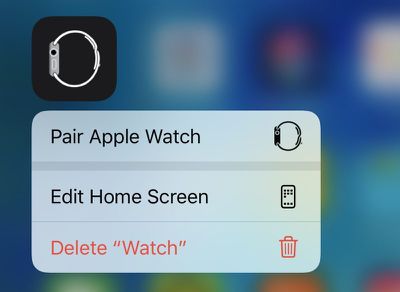 - Delete Apps From Home Screen - There's a new option to delete apps right from the Home screen when pressing on them with a ‌Haptic Touch‌ or 3D Touch.

Image via Emojipedia
- New Emoji Picker - When using a multi-person emoji, there's a new skin tone picker that lets you select a different skin tone for each person.

- Siri Privacy Splash Screen - When you first install iOS 13.2, there's a new splash screen that lets you opt out of sharing ‌Siri‌ and Dictation audio recordings with Apple.

- Audio Recordings - In the Analytics and Improvements section of the Privacy portion of the Settings app, there is a new toggle to opt out of sharing your audio recordings with Apple for the purpose of improving ‌Siri‌.

- AirPods Animation - In the last beta, we found images that reveal the design of the third-generation AirPods. This beta includes an animation that will walk users through changing the noise cancelation options on the new AirPods. Noise cancelation is one of the features expected to be included with the new earbuds.

This new animation in iOS 13.2 will teach users how to change noise cancelation options on the new AirPods. https://t.co/p17iN47Sy4 pic.twitter.com/T7YwaFw5Cv — Guilherme Rambo (@_inside) October 10, 2019

- Video Recording - When capturing video on the new ‌iPhone‌ 11 and 11 Pro models, you can change the resolution and the frames per seconds settings of the video directly in the Camera app. To do so, tap on the small icons that are located at the top left of the interface. Resolution and FPS can be changed independently depending on where you tap.

Know of a feature that's new in iOS 13.2 beta 2 that we left out? Make sure to let us know in the comments and we'll update this article.

techsantos
I've been waiting 84 years to be able to change recording settings within the camera app. What am I going to complain about now?
Score: 51 Votes (Like | Disagree)

shanson27
you can now change the resolution and the frames per seconds settings of the video directly in the Camera app ('https://www.reddit.com/r/iOSBeta/comments/dg1nfc/feature_ios_132_developer_beta_2_introduces/').

alpi123
The new delete app feature and being able to change the video settings within the camera app are nice touches.
Score: 11 Votes (Like | Disagree)

alexandr
see, i hate when they limit a purely software function (such as changing the resolution and the frames per second settings of the video in this case), to specific hardware in an attempt to steer more people towards buying new phones. so lame.
Score: 9 Votes (Like | Disagree)

I've been waiting 84 years to be able to change recording settings within the camera app. What am I going to complain about now?

you can complain that it's only on iPhone 11 models, even though there are a large number of models that have multiple recording options. I'm not on the beta, but that's what the post makes it sound like. It's incredibly frustrating to have to go so out of my way to change such a simple setting.
Score: 9 Votes (Like | Disagree)
Read All Comments

Saturday February 4, 2023 10:05 am PST by Eric Slivka
Online retailer TigerDirect has slashed pricing on the M1 iPad Air in several colors, offering the base 64GB configuration for just $313.99 in Purple and Pink. Note: MacRumors is an affiliate partner with TigerDirect. When you click a link and make a purchase, we may receive a small payment, which helps us keep the site running. That's a savings of 48% compared to Apple's normal $599.00...
Read Full Article • 359 comments

Sunday February 5, 2023 6:07 am PST by Joe Rossignol
Apple has discussed selling a new top-of-the-line iPhone alongside the Pro and Pro Max models in 2024 at the earliest, according to Bloomberg's Mark Gurman. Based on this timeframe, the device would be part of the iPhone 16 lineup or later. In a September 2022 edition of his weekly "Power On" newsletter, Gurman said there was "potential" for an iPhone 15 Ultra to replace the iPhone 15 Pro...
Read Full Article • 317 comments