Apple Adds Option to Delete Siri History and Opt Out of Sharing Audio Recordings in iOS 13.2

Today's iOS 13.2 beta introduces a new option that allows iPhone and iPad users to delete their Siri and Dictation history and opt out of sharing audio recordings, features that Apple promised after being called out for its ‌Siri‌ quality evaluation processes.

Earlier this year, it was discovered that Apple hired contractors to listen to a small percentage of anonymized ‌Siri‌ recordings to evaluate ‌Siri‌'s responses with the purpose of improving the assistant's accuracy and reliability. 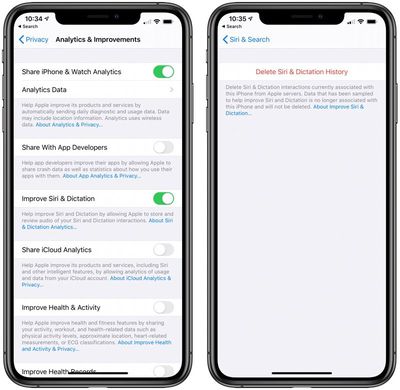 A report from one of those contractors who spoke to The Guardian said that the employees working on Siri "regularly" heard "confidential details" while listening to the audio recordings. The contractor also criticized Apple for not making it clear to consumers that some of their ‌Siri‌ recordings were being used for evaluation purposes.

Following the report, Apple suspended its ‌Siri‌ grading practices and told users that it would introduce tools allowing them to opt out of sharing their audio recordings.

iOS 13.2 brings multiple Siri-related privacy features as promised. When installing iOS 13.2, there's a new splash screen to opt out of sharing audio recordings, with Apple clearly explaining how those recordings are used.

Help Improve Siri and Dictation by allowing Apple to store and review audio of your Siri and Dictation interactions on this iPhone and on any connected Apple Watch or HomePod. You can change this later in the settings for each device.

This data is not associated with your Apple ID, and will only be stored for a limited period.

In addition to these new ‌Siri‌ and Dictation-related privacy features added in iOS 13.2, Apple also says that it is making further changes to its human grading process that will minimize the amount of data that reviewers have access to.

Apple should have done this since day 1.
Score: 11 Votes (Like | Disagree)

I still don’t like they had to be caught red handed to actually take action.

If they weren’t discovered, how long would they continue doing this?

to expand, first of all, I don’t even use Siri at all. But I am amazed at people who want the Siri to be as good as Alexa or Google Assistant, but then they are shocked when something like this happens!


People, smart assistants require a LOT of data in order to work the way you want them to work. End of story.
Score: 7 Votes (Like | Disagree)

jsmith189
Just saying, hope anyone that does this doesn't also complain about how bad Siri is.
Score: 6 Votes (Like | Disagree)

Does this delete Siri Suggestions (in spotlight?) I have found no way to delete these, which are based on your searches/maps history/etc.

Don't see why it would. Those are local, nothing to do with sharing with Apple. Pretty sure you can turn them off in Siri & Search, though (look under Siri Suggestions).

I got excited when I thought it was giving me the option to delete Siri.

You've been able to turn off Siri since the beginning, of course, so I assume this is a troll for likes.

Didn‘t they promise to make it „opt-in“?

You need to turn on Siri when you set up an iPhone, right? Depends on the phrasing there (or if there's an extra prompt).
Score: 3 Votes (Like | Disagree)

Didn‘t they promise to make it „opt-in“?

Agreed. These actions should all be “opt-in”
Score: 3 Votes (Like | Disagree)
Read All Comments