Apple today seeded the second beta of an upcoming iOS 13.2 update, and the beta adds new emoji characters that are part of the Unicode 12 emoji release. 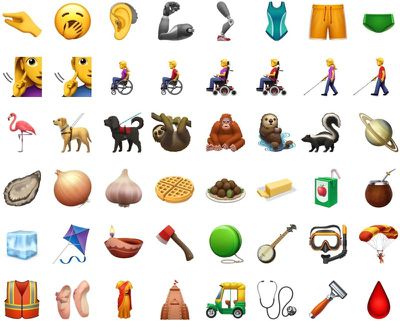 A full list of emoji that are included in the update can be found on the Emojipedia site. It's not entirely clear yet when iOS 13.2 will come out because we're only at the second beta, but it could see a late October or early November release.

fishcharlie
If only they added the option to remove Memoji Stickers that display to the left of the recent emoji keyboard section...
Score: 23 Votes (Like | Disagree)

scottcampbell
I need to be able to have a favorites folder, AKA, the 10 emoji I will actually use.
Score: 17 Votes (Like | Disagree)

Q: Why is Apple adding more emoji?
A: Because emoji are a driving factor in getting people to install updates. That's critical especially for updates that also contain security patches.

Q: No seriously, why?
A: Because a new version of Unicode has more available. While Apple is also part of the process deciding which future emoji make it into the standard, they have to agree with the results, just like everyone else. Otherwise, you end up in a situation where Android or Samsung or Windows have emoji that don't render on Apple's OSes, which people will rightfully blame Apple for (and possibly consider it an argument to move to a different OS).

Q: Their software quality has been going downhill.
A: That's not a question.

Q: But emoji are stupid!
A: Also not a question, but a valid opinion. Millions upon millions of people love them, though, and if you don't, they're really not particularly in your way. Not everything Apple does is about you.
Score: 11 Votes (Like | Disagree)

mozumder
Seems like a lot of complex picture detail in emoji design. Wish they went back to the original emoji design (from NTT DOCOMO) where emojis were more symbols instead of pictures.

Simple is better than complicated.
Score: 10 Votes (Like | Disagree)

Fixing the most important stuff. Props to the emoji team. Hope the team get assigned even more resources.
Score: 8 Votes (Like | Disagree)
Read All Comments