Today's event saw the launch of new iPhone 11 and ‌iPhone‌ 11 Pro models, an updated 10.2-inch iPad, and new Apple Watch Series 5 models, but there are several other hardware products that we're still expecting to see this fall.

A new 16-inch MacBook Pro with slimmer bezels and a new design is expected to be released sometime in the fall of 2019, as are updated iPad Pro models, which could potentially have the same three-lens camera system that Apple just introduced in the ‌iPhone‌ 11 Pro. 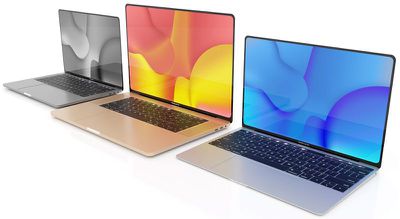 16-inch MacBook Pro mockup
Likewise, there are hints of new Apple Tags in the iOS 13 code, suggesting that product is also nearly ready to launch. Apple Tags are Apple's Tile competitor, which will let you find lost devices.

Apple Tags are expected to outperform competitors thanks to the inclusion of ultra wide band support in new ‌iPhone‌ models, which is more accurate than Bluetooth for indoor positioning purposes.

While we've never heard a specific launch date bandied about for the Apple Tags, there are so many signs of the feature in iOS 13 that we're expecting to see it in the near future.

Since rumors have suggested we should expect to see a 16-inch MacBook Pro and new ‌iPad Pro‌ models (not to mention more info on the upcoming Mac Pro), it's quite possible Apple will hold a second event in October.

Apple did, however, unveil the 10.2-inch ‌iPad‌ today, so it's not entirely clear why that device wasn't saved for an October event if we're getting new ‌iPad Pro‌ models. It's possible Apple's October event will be a "Pro" event with details on the MacBook Pro, ‌iPad Pro‌, ‌Mac Pro‌, and possibly other Macs that could see a fall refresh.

MacUser09425
The world can only absorb so much Innovation in 1 day.
Score: 35 Votes (Like | Disagree)

mr.steevo
And, still no G5 Powerbooks.
Score: 22 Votes (Like | Disagree)

travisharger
And AppleTV. Was really hoping for an update here. Hopefully in an October event.
Score: 19 Votes (Like | Disagree)

DocMultimedia
This October event will be a bit more interesting than recent ones. Hopefully.
Score: 16 Votes (Like | Disagree)