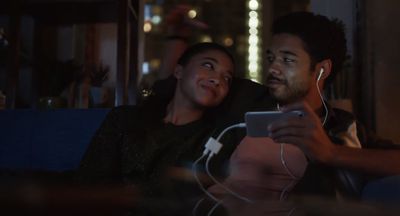 From Samsung's ad "Growing Up"
As discovered by Business Insider, the commercial "Growing Up" has now been removed from the main Samsung YouTube channel and the Samsung Mobile USA channel. The ad was released by Samsung in November 2017 as push back against the ‌iPhone‌ X and to promote the Galaxy Note 8, and similar anti-dongle ads released in 2018 have also disappeared this year. This can be seen in the dead links on our article for the "Ingenious" ads from July 2018.

The original "Growing Up" ad is still available on the Samsung Malaysia channel, however, and can be seen below. The ad depicts the life of a young man who finally decides to switch from Apple to Samsung, with one of the main points of contention being the lack of a 3.5mm headphone jack.


Samsung has historically used a mocking strategy when it comes to advertising its own products, taking to pointing out the downsides of its competition in an effort to sell Galaxy smartphones. The company has also made fun of iPhones for their speed, Apple's Genius Bar, the Apple Pencil, and much more.

Samsung just announced the Note 10 and Note 10+ yesterday, including an AMOLED Cinematic Infinity Display (the Galaxy Note 10+ features the largest display yet in a Note device). The Cinematic Infinity Displays are nearly bezel free and include a small chin at the bottom and a single hole punch camera cutout. There is also an ultrasonic fingerprint sensor, face recognition, and -- of course -- no headphone jack.

dannyyankou
The Internet is forever, Samsung.
Score: 66 Votes (Like | Disagree)

WWPD
They finally built up the COURAGE.
Score: 46 Votes (Like | Disagree)

otternonsense
It's still beyond me why these companies choose to copycat even the worst of Apple's decisions :(
Score: 37 Votes (Like | Disagree)

double dongle in the box

Don't search for this on Google.
Score: 34 Votes (Like | Disagree)
Read All Comments