Update: We were able to go hands-on with the new Galaxy Note 10 and Galaxy Note 10+, so make sure to check out our video for a closer look at Samsung's newest flagship devices.

Both of the smartphones feature an AMOLED Cinematic Infinity Display (2280x1080 for Note 10 and 3040x1440 for Note 10+), with the Galaxy Note 10+ featuring the largest display yet in a Note device. The Cinematic Infinity Displays are close to bezel free, with a small chin and the bottom and a single hole punch camera cutout. There is an ultrasonic fingerprint sensor for biometric authentication, plus Samsung's face recognition, and no headphone jack. 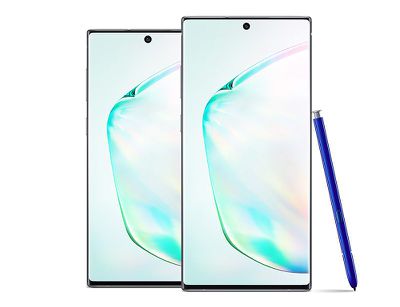 The Samsung DeX feature that makes it easier for Samsung users to swap between a phone and a PC or Mac now allows for files to be dragged and dropped between devices when connected via USB. Mobile apps can be used with a mouse and keyboard through DeX, and the Galaxy Note 10 also has a feature for a one click connection to a Windows 10 PC.

The Galaxy Note 10 features new S Pen technologies, including a redesigned, streamlined look for the pen itself. A new handwriting to text feature lets users write notes that can be converted to digital text in the Samsung Notes app, and Air actions are supported, allowing for customizable gesture-based controls with the S Pen.

There are new photo and video capabilities in the Galaxy Note 10, including a Live Focus Video option that adds depth-of-field adjustments to video and a Zoom-In Mic for amplifying audio. An improved super steady mode better stabilizes footage to cut down on shakiness.

A Screen Recorder feature captures what's on the screen for gamers, and a picture-in-picture feature can be used to add reactions while the S Pen can be used for annotations. Night mode, which brightens up dark photos, now works with the 10-megapixel front-facing camera.

An AR Doodle feature lets Note 10 users customize their photos with dynamic drawings, effects, and animations, while the new 3D Scanner (Note 10+) can take a scan of an object and turn it into a movable 3D rendering.

Other features include super fast charging with 45W wired charging capability for the Note 10+, Wireless PowerShare for charging other Qi-based wireless chargers with the Galaxy Note 10, and 5G options for fast speeds. The Galaxy Note 10+ is available in a 5G variant for those who want 5G speeds, and the LTE models offer up to 2Gb/s download speeds and 150Mb/s upload speeds.

dan9700
they diss apple for removing the headphones jack and now they did, fools
Score: 77 Votes (Like | Disagree)

6.3 and 6.8 inches? What’s the point of having two models that are nearly the same size?

This phone has nice specs, but I have absolutely zero interest in getting it. Apple just does too good of a job for me to even consider switching.
Score: 46 Votes (Like | Disagree)

heov
If that's a chin, then the iPhone X has a chin and forehead lol. And love handles.
Score: 40 Votes (Like | Disagree)

Agit21
Sad that the software update policy ruins every android phone out there.
Score: 31 Votes (Like | Disagree)

fabian9
6.3 and 6.8 inches? What’s the point of having two models that are nearly the same size?
Score: 27 Votes (Like | Disagree)
Read All Comments