Sunday November 5, 2017 1:57 pm PST by Mitchel Broussard
Samsung today posted a new video on its YouTube channel called "Samsung Galaxy: Growing Up," which follows the life of a young man as he purchases Apple devices over the course of ten years, and then decides to switch sides to Samsung on the eve of the iPhone X launch. The 1-minute commercial features the song "I'm Moving On" by Chyvonne Scott.

The video begins at the iPhone launch in 2007, and subsequent years show the main character facing storage issues when taking a photo and waiting in long lines under poor weather conditions for the latest iPhone. At one point, he drops his iPhone in water and has to place it in a bowl of rice, while his girlfriend's Samsung device continues to function.


Other points made in the ad center around the iPhone's lack of stylus support, as well as its need for dongles after the removal of the 3.5mm headphone jack in the iPhone 7. The ad ends with the character's decision to turn off his iPhone and purchase a Samsung Galaxy smartphone, and he eventually walks past a line of people waiting for the iPhone X -- including a guy with a notch-like haircut -- without joining them.

The latest Samsung smartphone is the Galaxy Note 8, which launched in September with dual rear cameras, a 6.3-inch AMOLED 'Infinity Display', and a new and enhanced S Pen with improved pressure sensitivity. Many publications favorably reviewed the Note 8 prior to its launch, agreeing that the lack of an explosive battery made Samsung's newest device a step up from the Note 7.

farewelwilliams
can someone explain how writing down a contact is much better than typing it in?

- you need two hands
- you need a stylus
- looks wildly uncomfortable to write without some palm rest
- unless there's some "google magic" going on, you can't search for that contact (EDIT: yes i know OCR exists, but you need to take extra steps to file it as a contact instead of saving as a note)
- looks unorganized
- much slower to write vs typing 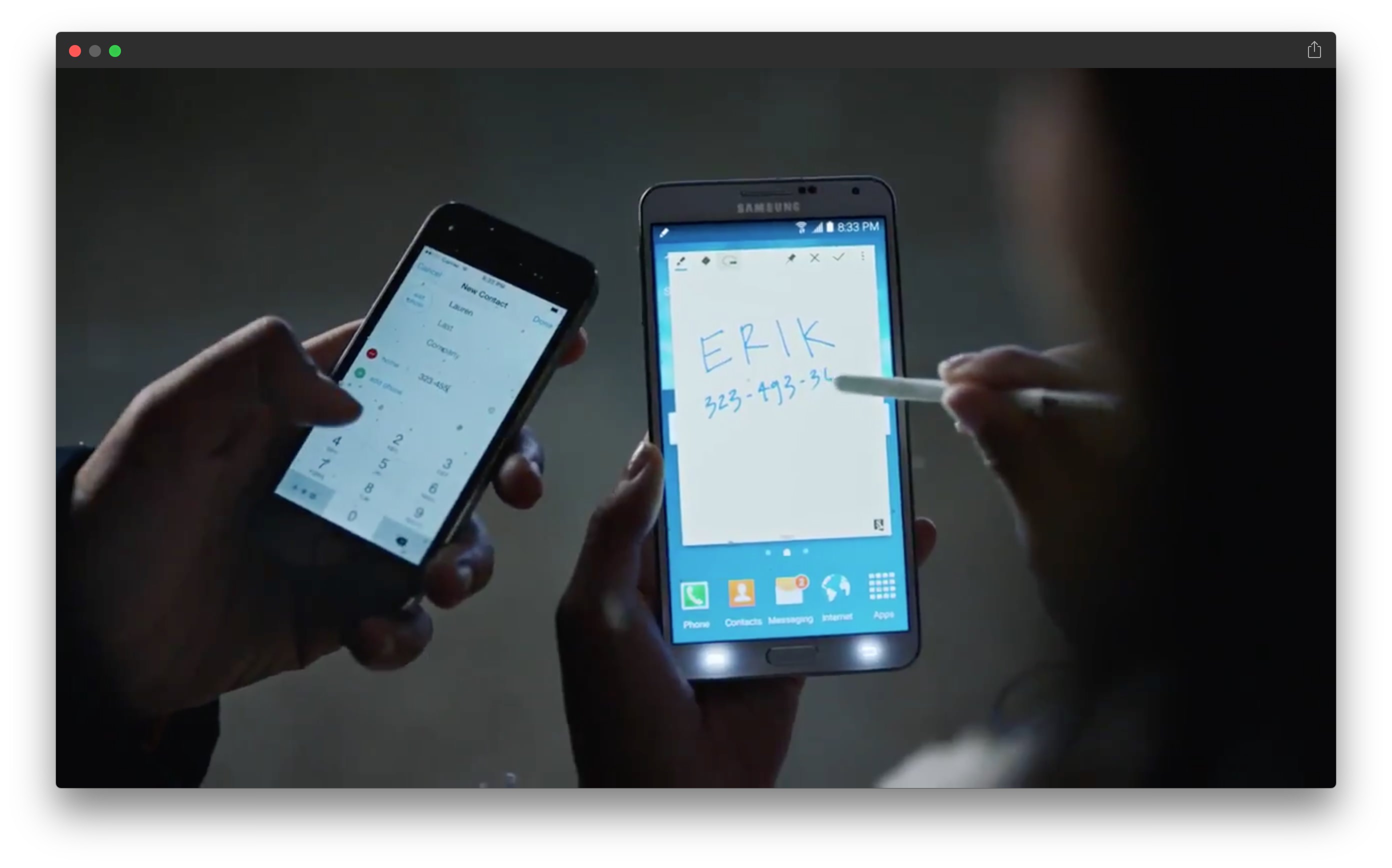 Maclver
At least I can bring my phone on an airplane :rolleyes:
Rating: 191 Votes

gusapple
Getting excited for Apple to respond with an ad showing a Note 7 exploding...
Rating: 181 Votes

otrfan84128
You'd think companies would have learned by now that ridiculing the competition is not a winning strategy. As an iPhone user, why would I want to switch to a product from a company that has basically told me I'm an idiot for not buying their product I the first place? Nobody ever wins a debate by insulting a competitor. If anything, ads like this make Samsung look as though they are desperately trying to hang onto their existing base rather than expanding it. If they feel their product is superior, as I would expect them to, they should tout its superior features, not try to make people who didn't buy it feel stupid for not doing so. Apple got away with "I'm a Mac ... I'm a PC" because it was genuinely funny, but I'd bet they found that after a while, even that campaign became counterproductive. To win in the marketplace you need a truly superior product and good marketing that PERSUADES, not ridicules.
Rating: 121 Votes

v0lume4
Say what you want, but that was an awesome commercial. Tastefully done. I considered buying a Note 8 this year, matter of fact.

The rice thing was so relatable.

bigjnyc
This ad showcased the iPhone more than anything, made me feel a little nostalgic about my old iPhones... don’t think that’s what they were going for
Rating: 62 Votes

brock2621
Well done ad. Although I can’t believe Samsung spends so much money making fun of and insulting potential customers it then asks to switch.
Rating: 57 Votes

Andy-V
Wow that was... direct. It features the iPhone so prominently that I'd honestly say it advertises it. Yes, they're trying to put it in a negative light, but I genuinely think this will sell more iPhones than hurt sales.
Rating: 52 Votes

DNichter
Haha Samsung wishes they had a flagship that sells like the iPhone
Rating: 44 Votes