The 2019 MacBook Air, refreshed last week, appears to have a slower SSD than the 2018 ‌MacBook Air‌, according to testing by French site Consomac. Using testing with the Blackmagic Disk Speed benchmarking test, the site found that the read speeds of the new SSD are lower. 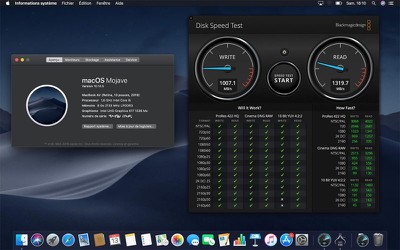 The 2019 ‌MacBook Air‌ features an updated True Tone display and a price drop, starting at $1,099 instead of $1,199. Students are able to get the new machine even cheaper, with the ‌MacBook Air‌ now priced at $999 with educational pricing.

It's possible Apple went with slower SSD performance in order to drop the ‌MacBook Air‌'s price to a more affordable level, and it's not a change that most ‌MacBook Air‌ users are likely to notice in day to day usage of the machine, especially those upgrading from a much older model.

BigBoy2018
The read and write speeds of SSD's are overrated. What matters a lot more in real world use is the access times.

Pretty much ANY SSD has access speeds 100 times that of a spinning hard drive, and that's where the real payoff is.

R3k
All you guys who own MacBook Air server farms are going to be pissed.
Score: 56 Votes (Like | Disagree)

Those price cuts had to come from somewhere :rolleyes:
Score: 49 Votes (Like | Disagree)

Elyzien
Does not matter how slow the SSD is when the CPU drops power by 50% because it is always over heating. You know why it is called the MacBook "Air", cuz you have to blow air on it while it is in use.

I always have fans blowing on my Gold Air & I have to use a fan control software to increase the internal fan; Apple has the fan trigger point too low!
Score: 34 Votes (Like | Disagree)

The read and write speeds of SSD's are overrated. What matters a lot more in real world use is the access times.

Pretty much ANY SSD has an access speeds 100 times that of a spinning hard drive, and that's where the real payoff is.

Nice to see logic and brains make a comment for once.
Score: 28 Votes (Like | Disagree)
Read All Comments