watchOS 6 is limited to developers and won't be available as a public beta ahead of its fall launch, so we thought we'd take a look at the software to give MacRumors readers a hands-on look at what's coming to the watch later this year.

Subscribe to the MacRumors YouTube channel for more videos.
For the first time, watchOS 6 brings a dedicated ‌App Store‌ to the Apple Watch, letting you search for, browse, and download apps right on your wrist even when an iPhone isn't available. The update also further untethers the watch from the ‌iPhone‌, as it allows developers to create apps that are just for the Apple Watch and don't need to be tied to a companion ‌iPhone‌ app. 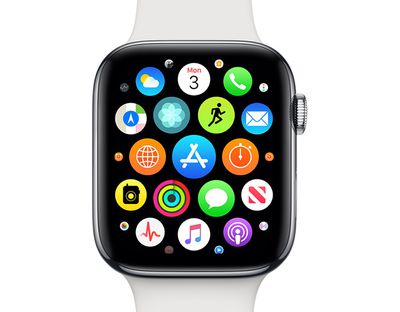 There are also some exciting new APIs that will bring new functionality to third-party apps, including a new runtime API for accessing sensor data for a longer period of time. The longer runtime API will lead to apps that can, as an example, guide you through a meditation or a workout.

A new streaming audio API will let third-party apps stream audio for the first time, so you can listen to streaming content with just your watch. Streaming audio support was previously limited to Apple Music.

There are quite a few new watch faces in watchOS 6, including Numerals Mono and Numerals Duo, focusing on huge numbers; Modular Compact, which puts an analog watch face next to larger complications; a gradient watch face that shifts over the course of the day; a Solar Dial watch face that visualizes the sun in a 24 hour path around the dial; and the California watch face, which offers standard analog dials and a mix of regular numbers and roman numerals.

Apple added a Taptic Chimes feature in watchOS 6, designed to provide a silent touch on your wrist at every hour. If sound is turned on, you'll hear an audible chime. Another new feature, holding two fingers on the watch face, lets you hear the time spoken out loud.

There are several new apps on the Apple Watch, including Audiobooks, Voice Memos, and Calculator, which lets you do calculations right on your wrist and even calculate tips and bill splits. There's also a new Noise app for tracking the decibel levels of environmental sound or music you're listening to on your earbuds to make sure you're not accidentally damaging your hearing health.

The Noise app is designed to send you a notification if it detects a decibel level over 90 decibels, which can impact hearing over time. Noise is a feature limited to Series 4 Apple Watch models.

Activity Trends, viewable on the ‌iPhone‌, is a new watchOS 6 feature that compares various fitness metrics from the last 90 days to the last 365 days to chart your progress and to make sure your overall fitness trends are improving.

Siri can provide full web search results when asked a question, and ‌Siri‌ is also able to identify songs via Shazam even when an ‌iPhone‌ isn't nearby. For Mac users, the Apple Watch can now approve security prompts when the side button is tapped, and it will also now display Apple ID verification codes when logging into an Apple account on a new device or browser.

When it launches in the fall, watchOS 6 will be available on all Apple Watch models with the exception of the original Apple Watch, released in 2015. For more on what's new in watchOS 6, make sure to check out our watchOS 6 roundup.

We’re getting very close to the point where you can decide to own a Watch as your primary device or even exclusively, without a phone.

I'm waiting for the "What's an iPad?" ad in which a small child edits a film on their Apple Watch.
Score: 19 Votes (Like | Disagree)

ipedro
We’re getting very close to the point where you can decide to own a Watch as your primary device or even exclusively, without a phone.
Score: 13 Votes (Like | Disagree)

MisterSavage
Why can't I get a digital watch face with hours, minutes, seconds?
Score: 10 Votes (Like | Disagree)

jent
It may take a few years but I hope Apple eventually releases a custom watch face store/builder.
Score: 10 Votes (Like | Disagree)

SeenJeen
as a man I am relieved to finally be able to keep track of my menstrual cycle from my wrist.
Score: 9 Votes (Like | Disagree)

as a man I am relieved to finally be able to keep track of my menstrual cycle from my wrist.


Meh, might be nice to keep track of your woman's MS. Kind of a heads up of things to come...
Score: 7 Votes (Like | Disagree)
Read All Comments