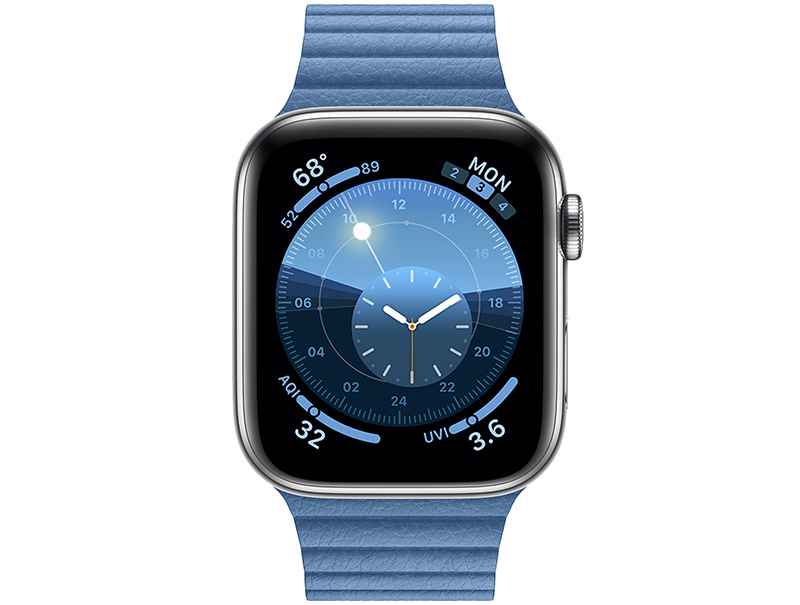 watchOS 6, released in September 2019, is the current version of the operating system designed to run on the Apple Watch. Like its predecessors, watchOS 6 brings new watch faces, updated apps, updated health features, and, for the first time, a dedicated App Store.

Apple has added an App Store you can access right on your wrist, and now that there's an App Store, you don't need your iPhone to download apps. Apps can be downloaded on the Apple Watch independent of the iPhone, something that hasn't previously been possible. You can browse through the App Store app to find apps, or you can use a Siri-voiced based search, or the Scribble app, and all the apps in the Apple Watch App Store can be installed without opening up the iPhone.

New watch faces in watchOS 6 include Modular Compact, Solar Dial, California, Gradient, Numerals Mono, and Numerals Duo, each with a unique look. Some of these faces are limited to newer Apple Watch models.

There's a Noise app that's designed to measure the noise level of the environment you're in, and it's able to send a notification if the sound is loud enough to result in damage to your hearing. Notifications are sent whenever the decibel level reaches 90 decibels.

Apple has also added a Cycle Tracking app on Apple Watch (and, on iPhone, in the Health app) that lets women log information related to their menstrual cycles for period and fertility tracking.

In the Activity app on the iPhone, there's a Trends tab that provides a long-term view of your activity so you can get a better overall look at your progress. The Trends feature shows whether trends are up or down for active calories, exercise minutes, walking pace, and more, and coaching is included to help you reach your fitness goals.

Several iOS apps have been ported to the Apple Watch for the first time, including Audiobooks, Calculator, and Voice Memos. The Calculator app has built-in tools for calculating tips and splitting checks.

A Taptic Engine feature allows the Apple Watch to tap out the hour on your wrist, and you can set a chime to ring in the new hour. If you hold two fingers on the watch face, it tells you the time out loud.

When you search for something using Siri on Apple Watch, Siri is now able to pull up full webpage results, displaying the info right on your wrist. Siri can also look up song lyrics using Shazam without your iPhone being nearby.

In the Messages app, you can access Animoji and Memoji stickers to send to people based on your own Memojis and favorite Animoji characters.

watchOS 6 includes updated tools for developers that allow third-party apps to stream music, radio, and podcasts, so these features are no longer be limited to Apple's own apps. Apple says Core ML on Apple Watch uses the Neural Engine, which allows for faster processing of on-device inputs.

watchOS 6 was released to the public on Thursday, September 19. At launch, it was available only on the Series 3, 4, and 5 Apple Watches, but it became available for the Series 1 and Series 2 Apple Watch models with the release of watchOS 6.1 on October 29, 2019.

The watchOS 6 update also requires an iPhone that's running iOS 13 to work, so those with a newer Apple Watch but an older iPhone that can't run iOS 13 or later won't be able to install the software and will need to continue to use iOS 12 or earlier.

The main feature in watchOS 6 is an App Store, which lets you download apps directly on the Apple Watch for the first time.

The App Store on Apple Watch is a full App Store where you can browse apps curated by editors, search via dictation or scribble, and look for apps by category. As with the iOS App Store, there are product pages for each app that you can view to see app information like reviews, screenshots, app details, ratings, and more. From these product pages, you can purchase and install apps. As of watchOS 6.2, the Apple Watch App Store supports in-app purchases and subscription options.

Coupled with the watchOS App Store, Apple has made some pre-installed apps watch only, which means a larger number of pre-installed watchOS apps can be deleted. In watchOS 6, you can remove apps like Alarm, Timer, Stopwatch, Remote, Camera Remote, Radio, Walkie-Talkie, ECG, Breathe, Noise, Cycle Tracking, and more.

Apps are able to be offered on a standalone basis in watchOS 6 because developers are now able to create independent Apple Watch apps that do not need to be tied to a companion iPhone app.

Developers also have access to an extended runtime API for accessing sensor data for a longer period of time, which let the watch do things like walk you through meditation, a workout, physical therapy, and more.

A streaming audio API lets third-party audio apps stream audio for the first time, so you can listen to streaming music with just your watch. Streaming audio was previously limited to Apple Music.

In the future, Apple Watch updates may be available over-the-air without an iPhone. In the watchOS 6 beta, there's a feature for updating the Apple Watch under Settings -> General -> Software Update.

Terms and conditions still need to be reviewed and accepted on an iPhone, which means there's still some iPhone interaction, but that could potentially be removed in the future.

watchOS 6 includes several new watch faces, though some of these are limited to the Apple Watch Series 4 and are not available on older Apple Watch models. Watch faces can be customized with different colors and complications.

There are new Numerals Duo and Numerals Mono faces, both of which focus on putting the time front and center. Numerals Duo features the time in a digital readout, while Numerals Mono shows the hour in digital format but also provides an analog face.

With a Gradient watch face, you can choose a color and then it animates as the time passes, shifting the location of the gradient.

The Solar Dial watch face visualizes the sun in a 24 hour path around the dial, shifting continually through the day and the night, and the California watch face offers standard analog dials and a unique mix of standard numbers and roman numerals for telling the time.

There are several new complications in watchOS 6 that can be used with the Apple Watch, though some are limited to Series 4 models.

Taptic Chimes are an Apple Watch feature designed to provide a silent taptic touch on your wrist at every hour. If sound is turned on, you'll also hear an audible chime.

There's also a Taptic Time feature accessible in Settings that causes the Apple Watch to tap a haptic version of the time. This setting is customizable, so you can have it tap in morse code or with various tap lengths to distinguish hours and minutes.

Holding two fingers on the watch face tells you the time out loud if the feature is enabled in the Settings app.

The Audiobooks app is designed to let you listen to your audiobooks on your wrist without the need to start an audiobook on your iPhone.

Apple Books titles in your Reading Now list automatically syncs to your watch. Tapping on the cover of a book in Audiobooks causes it to play right where you left off regardless of which device you were listening on.

A Calculator app has been added to the Apple Watch in watchOS 6, allowing you to do quick calculations right on your wrist. Calculator includes a built-in tool for calculating a tip and splitting a bill with friends.

Voice Memos is a dedicated Apple Watch app in watchOS 6, letting you record quick voice-based notes. With a Voice Memos complication, you can record your thoughts with a quick press on the watch face.

The new interface lets you quickly schedule a new reminder, and scroll with a finger or the digital crown lets you access all of the different sections like Today, Scheduled, Flagged, and All, along with individual lists of reminder categories you've created.

Messages now supports the Animoji stickers that were added in iOS 13, letting Apple Watch users send their favorite personalized stickers. Memoji stickers can also be sent, but only if they're in the recently sent character list ported over from the iPhone.

If your activity levels are declining rather than trending upwards, the Activity Trends app offers up helpful tips to keep you motivated. Trends upwards or downwards are distinguished with upward or downward arrows.

Apple Watch is able to monitor the noise level around you in watchOS 6, making sure you're not exposed to noise and sound over time that can end up damaging your hearing.

Noise monitoring is done through a new Noise app that measures the decibels of the ambient environment using the Apple Watch's microphone, alerting you if sound over 90 decibels is detected. This feature also works with AirPods and headphones to make sure you're not listening to your music too loudly. The Noise app is limited to Series 4 and Series 5 Apple Watch models.

When you ask Siri a question that involves a web search, the results can now be displayed as full webpages on Apple Watch.

When connected via LTE, Siri can also now take advantage of Shazam even when an iPhone is not nearby for identifying songs.

When using Apple Watch with a Mac, there's now an option to approve security prompts by tapping on the side button of the watch when prompted by the Mac, and the Apple Watch also now displays Apple ID verification codes for when you need to log in to your Apple account on a new device or browser.

What's Next for watchOS

watchOS 7, which is expected to launch this fall, will bring new watch face features, parental controls, and more, with details outlined below.