Apple CEO Tim Cook made a surprise appearance at Berkshire Hathaway's annual meeting in Omaha, Nebraska over the weekend, where he said he is "thrilled" that billionaire Warren Buffett is an investor in the iPhone maker. 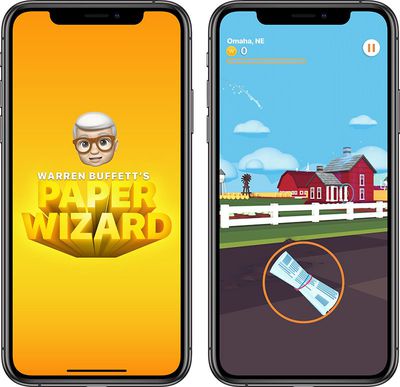 At the start of the shareholder meeting, Cook made a cameo appearance in a humorous short film in which Buffett visits a top-secret lab at Apple to try to come up with ideas for an app and other inventions, including a time machine where Buffett tells his childhood self to buy Apple stock, according to CNN.

As it turns out, the game is actually real.

Warren Buffett's Paper Wizard, a free download on the App Store, tasks players with flinging newspapers to collect Warren Bucks. The game gradually increases in difficulty as players make their way from Omaha to Apple's hometown of Cupertino, California, including a visit to Apple Park.

Think you can toss a newspaper like the legendary Warren Buffett? Test your paper-flinging skills as you make your way from the streets of Omaha, Nebraska, all the way to Cupertino, California. Avoid vehicles and birds as you deliver papers to buildings near and far. Will anyone collect enough Warren Bucks to dethrone the Paper Wizard? Probably not.

While the game's developer is listed as Wildlife Designs, Inc on the ‌App Store‌, the app is copyrighted, maintained, and operated by Apple according to its terms and conditions, making this the first game Apple has developed for the ‌iPhone‌ since Texas Hold'em back when the ‌App Store‌ launched in 2008.

In an interview with CNBC, Cook said Buffett has made it clear he does not invest in technology companies, meaning he "obviously views Apple as a consumer company." Cook also said Apple acquires a company every two to three weeks on average, including 20 to 25 companies in the last six months.

smaffei
Wow! So, Apple makes a game just to kiss a huge supporting investor's ass?!? Do we need anymore proof of who Apple is oriented towards? It's not the consumer.

macduke
This. This is the moment I've been waiting for. This is the first time that I can unequivocally say it:

PickUrPoison
This is awesome just for its apparent ability to make Apple-haters heads explode! :eek:
Score: 18 Votes (Like | Disagree)

BWhaler
For a company that brags about the thousands of “no’s” it makes to stayfocused, this seems like a miss.

Surely a calculator for the iPad is a higher priority?
Score: 16 Votes (Like | Disagree)

Or, kiss huge investor's butts. Apple did this as a thank you for Buffet not dropping their stock during the sales downturn. And, I agree, it is embarrassing.
Score: 15 Votes (Like | Disagree)
Read All Comments