Multiple reports suggest that Apple is developing an augmented reality headset or glasses that could be released by 2020 or 2021, and a newly granted Apple patent may provide some broad clues about potential features.

The U.S. Patent and Trademark Office on Tuesday granted Apple a patent describing a "method for representing points of interest in a view of a real environment on a mobile device," and while there is no specific mention of so-called Apple Glasses, the patent describes a "head-mounted display." 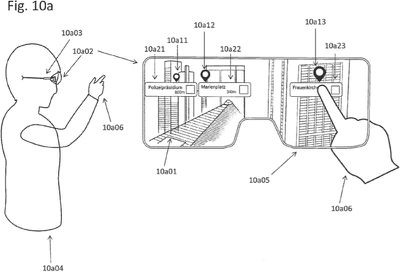 As with many other augmented reality devices, the head-mounted display would be able to overlay computer-generated virtual information onto a view of the real environment. More specifically, the headset would have a camera that is able to identify and annotate points of interest and other objects.

One illustration in the patent shows a head-mounted display showing buildings, each identified with an overlaying label. In another embodiment, an iPhone is shown with detailed information about a specific point of interest.

While the head-mounted display looks like a pair of snowboarding goggles, patent illustrations are merely examples.

Apple files numerous patent applications every week, of course, and many of the inventions do not see the light of day. Patents are also very detailed, encompassing many possible ideas, even ones that Apple might not have any plans to advance. So, the exact implementation if any remains to be seen.

At this point, it's not entirely clear if Apple is working on Google Glasses-like glasses or a HoloLens-like headset. Apple CEO Tim Cook has expressed more of an interest in augmented reality than virtual reality, however, and the patent does suggest that Apple is focused on augmenting the real world.

Bloomberg's Mark Gurman has previously reported that Apple's headset will use a custom iOS-based operating system dubbed "rOS" for now. He also said the headset would wirelessly connect to an ‌iPhone‌.

Apple has acquired multiple augmented reality startups including Metaio in 2015, Vrvana in 2017, and Akonia Holographics last year, and has hired away employees from HoloLens and similar companies, as it continues to work on the project. In fact, the inventors listed on this patent are former Metaio employees.

AppleInsider was first to report on the patent being granted today. Apple applied for the patent back in 2017.

AR & VR are dead as consumer products. They may have some use for professionals, but the general consumer isn't going to wear a device that blocks their mobility.

Yup. And smartphones were dead in 2005 because no one could invent a means of passing inputs to the phone without a keyboard. Oh...yeah...right...
Score: 15 Votes (Like | Disagree)

This is so unbelievably incorrect.
Score: 14 Votes (Like | Disagree)

I would expect Apple to be curious - but that doesn't mean they will actually make a product... Apple does patent trolling as well.

I believe great augmented reality glasses will kill off the Apple Watch some day... Maybe even the iPhone.

They limit your field-of-view and are distracting with lag.

You wouldn't drive with it.

No, AR doesn't limit your field of view. VR does. AR gives you your full field of view, and augments it by superimposing things over some of what is already in your view. People already drive with AR - some cars have heads up displays, for example. Fighter pilots fly with AR helmets. It's fine.
Score: 7 Votes (Like | Disagree)

MacATDBB
Kind of surprised this passed prior-art as I'm pretty sure I came across virtually the same thing described in detail 30 years ago in Scientific American.
Score: 6 Votes (Like | Disagree)

I would expect Apple to be curious - but that doesn't mean they will actually make a product... Apple does patent trolling as well.

I believe great augmented reality glasses will kill off the Apple Watch some day... Maybe even the iPhone.

this is a pure Patent troll attempt and an absolute shocker that this was even granted.

there is prior art of existing tech that does this.

I remember trying an App back in 2015 that attempted to do this, overlay points of interest over buildings when I did a tour of Europe. it sucked.. But was pretty much what this patent is claiming.

now, i have no doubt with Apple's power and money they can make a version of this that doesn't completely utterly suck. But, prior art is prior art. This is a patent that shouldn't have been awarded.