T-Mobile won't be making a serious push into launching and promoting its 5G network until the second half of 2019, T-Mobile CTO Neville Ray said in an interview shared by CNET today.

The carrier had initially planned to promote 5G in the first half of 2019, but it is delaying that rollout because smartphones able to take advantage of its 5G network won't be available until later. 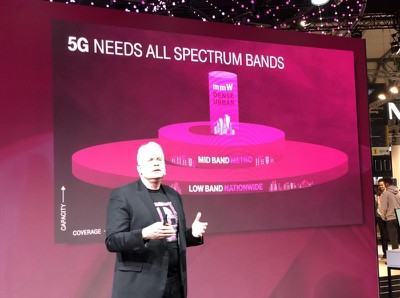 Image via CNET
According to Ray, T-Mobile had hoped that smartphone makers and chip manufacturers would have 5G devices ready to use the lower-band 600 megahertz spectrum that will power much of its 5G network, but that hasn't quite happened. The company instead plans to "go big" with 5G later in 2019.

The 5G version of the Galaxy S10 from Samsung, which will come in April, offers millimeter wave support compatible with Verizon, AT&T, and Sprint, but not T-Mobile. T-Mobile is deploying millimeter wave, but coverage at the moment is "too minimal for the company to promote."

T-Mobile is planning to use the 600MHz spectrum to power most of its 5G network because while it offers slower peak speeds, it provides better coverage than the millimeter wave spectrum that Verizon and AT&T are currently focusing on more heavily.

CNET's original story suggested T-Mobile was delaying its 5G launch entirely, but Ray says that is not true. On Twitter, Ray clarified that 5G will still start rolling out in the first half of 2019, but that it will get "more meaningful" in the second half of the year when there are actual devices that can take advantage of the 600MHz 5G spectrum.

Sorry, Roger. That's wrong. We've always said we'd launch when phones are available and they will be in H1. H2 is just when it gets more meaningful ... but there's no delay and no change of plans. — Neville (@NevilleRay) February 25, 2019

The network differences put T-Mobile a bit behind other cellular companies. AT&T has rolled out 5G in 12 cities, Verizon has a 5G home broadband service in a limited number of cities, and Sprint is planning to launch its 5G network in May.

T-Mobile isn't worried about AT&T and Verizon having an edge in the race to deploy 5G just because millimeter wave spectrum has such a limited range. "You can't go to a US consumer and charge them a big premium and it works on three street corners," Ray told CNET.

For Apple users, the 2019 rollout of 5G means little because there won't be iPhones able to use 5G networks until at least 2020. Rumors have suggested Apple won't introduce a 5G-capable iPhone in 2019, and Intel recently confirmed that its 5G hardware won't be in consumer products until 2020. Apple is currently using Intel's modem chips in its ‌iPhone‌ lineup due to an ongoing legal spat with Qualcomm.

Translation: We will wait for ATT and Verizon to pay all the up front costs and swoop in once the tech is mature and commoditized.

Not really, since pretty much no company is doing much rollout in any of 2019.
Score: 11 Votes (Like | Disagree)

Sedulous
Who really cares? 5G will not be beneficial for the vast majority of users. If anything, I think T-mobile has the better plan. 600 MHz spectrum may be slower but at least it can pass through a wall. So unlike the Verizon and AT&T, T-mobile might actually have a more reliably decent signal. Gigabit speeds on mobile is useless if it cannot be received.
Score: 11 Votes (Like | Disagree)

jlocker
The real reason is T-Mobile and Sprint are about to merge and you don't want to spend a lot of money on 5G hardware when you are going to be using sprint towers as the infrastructure and spend a bunch of money on hardware all over again.
Score: 5 Votes (Like | Disagree)

nutmac
At 28-39 GHz in the US, which translates to only few hundred feet of usable range, mmWave is meaningful only in very densely populated metro cities, or top 50 markets (if at that).

Sprint is betting on 2.5 GHz and T-Mobile is betting on 600 MHz. Neither will offer as much bandwidth as mmWave, which is why they want to merge so that they can leverage Carrier Aggregation (combining multiple frequencies). If Sprint and T-Mobiles does merge, the combined 5G spectrum can be very effective and superior to AT&T and Verizon's 5G offering.
Score: 5 Votes (Like | Disagree)

Do you currently have 5G at home?

I think 5G fixed wireless access will have a much greater impact for the average user than 5G mobile.

absolutely agree. 5g for mobile is severely overrated. But it will change the home internet landscape.
Score: 4 Votes (Like | Disagree)
Read All Comments