Apple today released the first beta of iOS 12.2 for developers, and while it doesn't bring as many new changes as we might have hoped for in a 12.x update, there are still quite a few minor tweaks to be aware of.

Below, we've listed all of the new features and changes that we've discovered in iOS 12.2 so far, and we'll update this post should any additional features be found.

- Apple News for Canada - iOS 12.2 expands the availability of Apple News to Canada for the first time, with news sources available in either English or French. 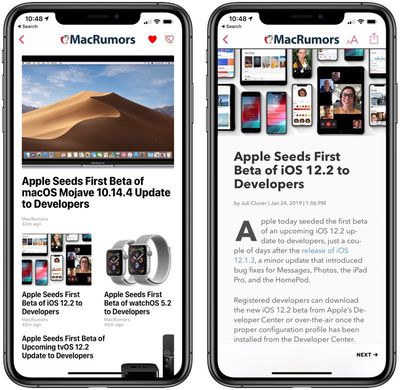 - HomeKit TV Support - Apple recently announced that HomeKit support is coming to a number of third-party TVs, and iOS 12.2 introduces the infrastructure to allow users to add their TVs to ‌HomeKit‌.

- Home Controls for TVs - Open up the Home app, tap the house-shaped icon in the upper left, choose "Home Settings" and you'll see an updated section for "Allow Speaker & TV Access," which was previously just "Allow Speaker Access." This setting lets you choose who can access and send content to your speakers and TVs.

- Redesigned TV Remote - The TV Remote feature in Control Center has been redesigned with a more streamlined look that takes advantage of the entire display and does away with the large Home button. The TV Remote also has a new dark interface, which was added in beta 3.

Old design on left, new design on right
- Wallet - The Wallet interface has been slightly tweaked when viewing a single card within the Wallet app. The info button has been relocated to the top, and there's now a "Done" button instead of an option to tap other cards at the bottom of the app. Transaction information is now listed more clearly, with a longer history available. The main wallet interface is largely unchanged, but the "+" button to add a new card is now black instead of blue. These changes may have been implemented ahead of a credit card partnership Apple is rumored to be entering with Goldman Sachs, which could be unveiled soon.

New design on left, old design on right
- Apple Pay Cash - There's an "Add Money" option in Wallet when you select the Apple Pay Cash card. Before, you needed to go into the more detailed ‌Apple Pay‌ Cash view to add money to the card.

- Safari search arrows - When entering a search term or website in the main bar in Safari, under the "Google Search" autofill section, there are now little blue arrows. Tapping an arrow adds the text to the search field, so you can get more targeted search results with just a few taps. In prior versions of Safari, tapping on a Google Search result simply conducted the search.

- Unsecure websites - Sites that do not use a secure HTTPS connection are now prominently listed as "Not Secure" in the Safari menu bar. There was a "Not Secure" feature in prior versions of iOS, but it only showed up on pages requesting a password or credit card. Now any unencrypted site shows the "Not Secure" heading.

- Air Quality in Maps - In the Maps app, there's a new option to display Air Quality alongside weather readings. It can be activated in the Maps section of the Settings app.

- Downtime in Screen Time - When using the Downtime feature in Screen Time, you can set Downtime options on a day by day basis. Prior to iOS 12.2, you weren't able to select specific days and times to activate Downtime.

- Safari Privacy - Apple is improving Safari's privacy in iOS 12.2 through a new Motion & Orientation toggle located under Settings --> Safari --> Privacy & Security, which is disabled by default. The setting needs to be enabled on to allow websites to display content that relies on motion data from the accelerometer and gyroscope in the iPhone and iPad.

- Lock screen charging fix - The second beta of iOS 12.2 had a pesky bug that caused the ‌iPhone‌'s charge to be displayed on the Lock screen instead of the time. In beta 3, that's been fixed.

- Apple News logo - In the ‌Apple News‌ app, instead of spelling out "‌Apple News‌," Apple uses the "" symbol along with the word "News," similar to ‌Apple Pay‌.

-‌Apple News‌ app icon - Along with a new logo, ‌Apple News‌ has a new app icon featuring a stylized red N on a field of white.

- About screen - The interface for viewing information about your ‌iPhone‌ has been updated and rearranged in a more logical way with info like model number and serial number at the top with carrier information at the bottom.

Siri Apple Store suggestions - There's a new section under Siri & Search > Apple Store that indicates ‌Siri‌ in iOS 12.2 will be able to suggest Today at Apple sessions for you based on your Safari and app usage.

Audio Messages quality - Audio messages, which can be sent in the Messages app, sound a lot better in iOS 12.2 thanks to the adoption of a new 24000 Hz Opus codec that makes spoken audio sent to friends and family crisper, clearer, and louder. The higher quality audio messages can be sent and received from devices running the iOS 12.2 update.

The iOS 12.2 update is available to both developers and public beta testers at the current time. It's not yet known when Apple plans to release the update, but because it includes hints of the new ‌Apple News‌ service, which is expected to debut in late March, it could be released right around that time.

BeyondtheTech
All these little tweaks all over the place, and yet, the iPhone’s original “killer app,” the Phone app, has yet to get features and fixes it needs:


* The swiping and selection in the scroll list is still limited to one entry at a time, where every other app that can swipe to erase or perform an action on multiple entries.
* CallKit API needs to have RegEx support instead of a discombobulated JSON table of every phone number combination.
* Blocked Callers list is still rudimentary at best, can’t export or import
* Whitelisting / Allowed Callers list is a much-more-needed feature to just allow your contacts to reach you
* Incoming calls still paralyze your entire iPhone experience. Should be a pop-up or banner notification that can be dismissed, and even let the call continue to ring in the background until it times out, instead of forcing it directly to voicemail.
* Google Pixel 3’s new call screening feature is so desperately needed on the iPhone. Your phone number should be able to be made as private as a social media account.
Score: 10 Votes (Like | Disagree)

ersan191
Not a fan of the Remote redesign - hopefully they don't do away with the skip forward/back buttons as I use them a lot.
Score: 8 Votes (Like | Disagree)

BornAgainMac
I feel like iOS 13 is going to be a huge update after reading this article for some reason.
Score: 7 Votes (Like | Disagree)

sniffies
What a great ad for ESPN
Score: 6 Votes (Like | Disagree)