Following today's news that Samsung and Apple have worked together to bring an iTunes Movies & TV app and AirPlay 2 support to 2018 and 2019 Samsung smart TVs, Apple has updated its AirPlay page with additional info on how that feature will be implemented on TVs. Among the details described as coming soon:

- Apple says "leading TV manufacturers" will be including AirPlay 2 support in their TVs, indicating that this initiative will not be a Samsung exclusive. Apple has not, however, announced additional TV partners or a timeline for when AirPlay 2 will come to these other brands. Samsung's support is rolling out in a firmware update for 2018 TVs and built into 2019 models "beginning this spring." 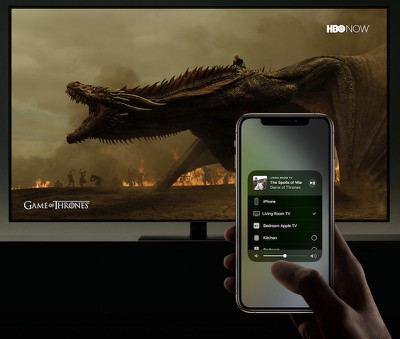 - You can already control AirPlay content such as play/pause, fast forward, and rewind via a Lock screen widget or Control Center on your iOS device, and Apple has confirmed that AirPlay content on smart TVs can be controlled the same way, including control of the TV volume.

- Smart TVs with AirPlay 2 will also integrate with Siri and HomeKit, meaning you can use your voice to request that a specific show be played on a specific TV, for example.

It's unknown whether we can expect to hear more announcements about Apple's smart TV partnerships this week at CES, but we'll certainly be looking forward to more details about which TVs will support greater integration with Apple's services and when.

sully54
I’m thinking this is a move to prepare for apple’s video streaming service.
Score: 10 Votes (Like | Disagree)

ouimetnick
This pretty much rules out needing an Apple TV. Just AirPlay from an iOS or MacOS device. That is assuming you are in the market for a new fancy TV. Our old 2008 720p Panasonic Plasma still works just fine. The 4K quality is impressive though.
Score: 7 Votes (Like | Disagree)

This pretty much rules out needing an Apple TV. Just AirPlay from an iOS or MacOS device.

I used to do this for years on the ATV2/3 before the Apple TV supported apps. I never want to have to go back to doing that.
Score: 7 Votes (Like | Disagree)

adrianlondon
"AirPlay 2-enabled TVs will act just like any other AirPlay 2 speaker, meaning you can send many different types of audio..."

so how does that replace an Apple TV? I can't even find the point of sending audio to a TV anyway; might as well send it to a sound system.
Score: 6 Votes (Like | Disagree)

Porco
It makes sense. To me this is just the modern-day equivalent of when they announced iPods and iTunes would be on Windows and not exclusively for Macs anymore.
Score: 5 Votes (Like | Disagree)
Read All Comments

Friday July 10, 2020 11:12 am PDT by Juli Clover
Apple this month published a support document that warns customers against closing their Mac notebooks with a cover over the camera as it can lead to display damage. Image via Reddit Apple says that the clearance between the display and the keyboard is designed to very tight tolerances, which can be problematic. Covering the camera can also cause issues with automatic brightness and True Tone....
Read Full Article • 233 comments

Thursday July 9, 2020 10:14 am PDT by Juli Clover
Apple today seeded the first public betas of upcoming iOS and iPadOS 14 updates to its public beta testing group, two weeks after first providing the updates to developers after the WWDC keynote and a day after seeding the second developer betas. Public beta testers who have signed up for Apple's beta testing program can download the iOS/‌iPadOS‌ 14 updates over the air after installing ...
Read Full Article • 191 comments

Friday July 10, 2020 2:58 am PDT by Tim Hardwick
At last month's WWDC, Apple officially announced that its Mac computers will be transitioned from Intel x86 to homegrown Apple Silicon chips. Apple said it plans to deliver the first Apple Silicon Mac by the end of the year and complete the transition in about two years. According to Apple analyst Ming-Chi Kuo, a 13.3-inch MacBook Pro with a form factor similar to the current 13.3-inch...
Read Full Article • 151 comments