In the iOS 12.2 beta, Apple has improved the quality of the audio messages sent in the Messages app after switching to a new Opus codec at 24000 Hz, up from the previously used AMR codec at 8000 Hz.

Details on the improvement in audio quality were shared on Twitter this morning, and we confirmed the change on our own devices. Apple previously used the .AMR file format for its audio messages, but in the beta, has swapped over to .CAF. 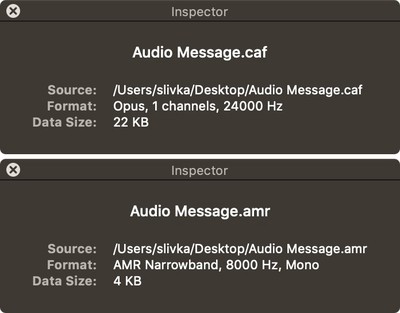 The new 24000 Hz Opus codec appears to result in larger file sizes, but that shouldn't be much of an issue as Messages defaults to deleting audio content after just a few minutes.

All iOS users can expect to see significant improvements in audio message quality in the Messages app upon updating to iOS 12.2. We're expecting to see iOS 12.2 released shortly after Apple's March 25 event, as it will also allow Apple to enable the new Apple News subscription service that's set to be introduced.

jsmith189
FINALLY. I use this a lot, and have just taken to using the Voice Notes app and sending them that way. This is a much welcomed improvement.

Now can we just get a swipe and lock for longer audio messages?
Score: 6 Votes (Like | Disagree)

now i see it
Over 20 years of experience fiddling around with audio codecs and someone approved a 8000 Hz codec. Now that's a head scratcher.
Score: 6 Votes (Like | Disagree)

mjbadagliacco
I just want to be able to leave a voice message when someone does not answer a FaceTime or FaceTime Audio call... Come on Apple, what is holding this up?
Score: 3 Votes (Like | Disagree)

greenorblue
WOW. I have been yelling and emailing Apple about this for ****ing years. Thank god.
Score: 2 Votes (Like | Disagree)

It's about time we get up-to-date audio messaging where it no longer takes a few tries to figure what the person is saying.
Score: 2 Votes (Like | Disagree)

Over 20 years of experience fiddling around with audio codecs and someone approved a 8000 Hz codec. Now that's a head scratcher.

Not a head scratcher at all. It's for compatibility with MMS in mixed messaging scenarios. AMR-NB is the standard codec defined there due to its use in GSM.