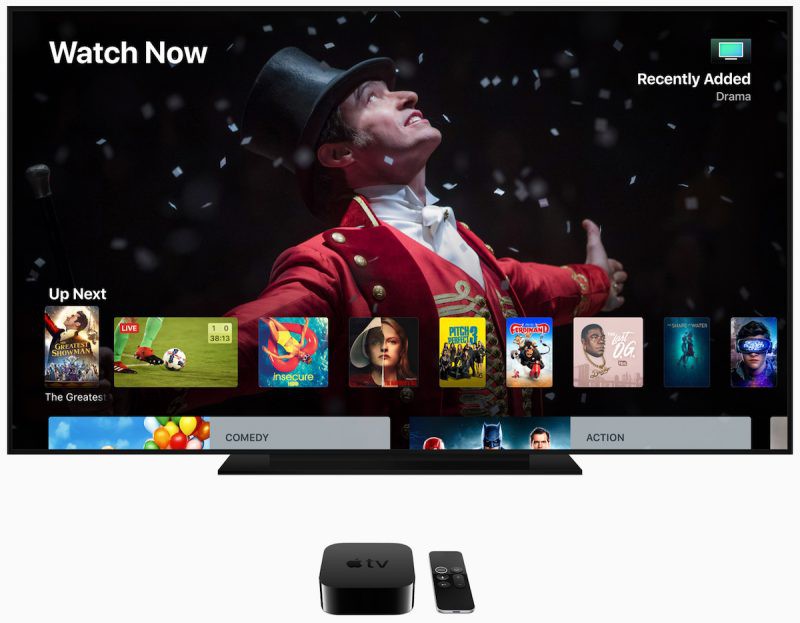 The tvOS 12 public beta can be obtained by going to the Settings app on the Apple TV and navigating to the Software Updates section under "System." "Get Public Beta Updates" will need to be toggled on, and once it is, the Apple TV will download the beta software.

tvOS 12 brings long-awaited support for Dolby Atmos sound, which was activated in the second beta. Apple has been adding Dolby Atmos support to its iTunes content, and with the tvOS 12 launch, iTunes will be home to the largest collection of movies that support Dolby Atmos.

Customers that have previously purchased movies that gain Dolby Atmos support will see free upgrades to their titles, much like the rollout of 4K support.

Building on single sign-on, a new zero sign-on feature further simplifies the cable authentication process. With zero sign-on, the Apple TV can detect a user's broadband network and automatically sign them into supported apps they receive through their accompanying cable subscription.

Zero sign-on will be available for Charter Communications customers this fall and will expand to additional cable providers in the future.

In tvOS 12, Aerial screensavers include location information for the first time, and there are new screensavers captured in collaboration with the International Space Station.

Other tvOS-related improvements include AutoFill passwords from iPhone, an Apple TV Remote automatically added to Control Center on the iPhone or iPad, and Apple TV support on Home control systems like Control4, Crestron, and Savant.

Apple plans to release tvOS 12 to the public on Monday, September 17, right alongside iOS 12 and watchOS 5 updates. For more information on the new features coming in tvOS 12, make sure to check out our tvOS 12 roundup.

liberte1776
Funny, I don't show any updates available, what is the build number of the GM?
Score: 2 Votes (Like | Disagree)

DNichter
Has anyone seen any of the new screensavers throughout the beta period? None for me. Set to download daily.
Score: 1 Votes (Like | Disagree)

Funny, I don't show any updates available, what is the build number of the GM?

Has anyone seen any of the new screensavers throughout the beta period? None for me. Set to download daily.