Apple will launch lower-priced versions of four products this year, including an iPad, iPhone, MacBook Air, and HomePod, according to a translated report from Taiwan's Economic Daily News via Japanese blog Mac Otakara. 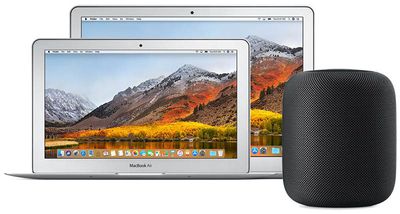 We've already heard rumors about more affordable iPad, iPhone, and MacBook Air models, but this is the first word of a supposedly lower-priced HomePod being on Apple's roadmap. The speaker is forecast to launch in the second half of 2018 for between $150 and $200 in the United States.

At $349, the current HomePod is considerably more expensive than the Amazon Echo and Google Home for $99 and $129 or less respectively. But the HomePod also has significantly better sound quality than its smart assistant rivals, in line with Apple positioning it as a high-quality speaker first and foremost.

A lower-priced HomePod would certainly be more competitive with the Echo and Google Home, but it's unclear if that would come at the expense of audio quality. One possibility is that Apple will release a smaller HomePod mini that still delivers premium sound relative to other portable speakers in that category.

Here's the full breakdown of the Economic Daily News report, based on what we could gather from a translated version:

It's worth noting that these prices are estimates, as it's hard to envision Apple sharing pricing information with its supply chain partners.

Of the four products, the new iPad and MacBook Air are most likely to debut first. Apple is rumored to unveil new devices later this month, but it's unclear if the announcements will be made via press release or at a media event. If there is a keynote planned, invites would certainly have to go out soon.

The new 6.1-inch iPhone should debut in September alongside a new iPhone X and so-called iPhone X Plus, and the lower-priced HomePod could certainly be introduced at the same event. The current HomePod launched in early February.

HomePod mini...? price won't be mini though. were as Google and Amazon's mini speakers are $25-50 depend on sale

You really think any smart device costs $25? Google isn’t selling hardware at a loss. You’re giving them your data with which they make money off of you and you’re paying $25 for the privilege. I’ll happily pay full price for an Apple device and keep my privacy any day.
Score: 22 Votes (Like | Disagree)

Baymowe335
If Apple starts competing on mid-tier, watch out.

They are transforming into a services company and want devices in as many hands as possible. They have essentially owned the high end market and are now going after the middle markets with products that aren't "Cheap" but are more attainable. My guess is they'll be offering a lot more services after sale to fatten margins.

This HomePod "Mini" definitely takes aim at cheaper smart speakers but will be a better product quality (from a sound perspective) than an Echo Dot.
Score: 7 Votes (Like | Disagree)

Guessing a HomePod Mini is coming.

Forget retina, just give us a damn IPS display at the same resolution and I'd be happy. The current display in the Air is a washed-out disaster.
Score: 5 Votes (Like | Disagree)
Read All Comments