World Emoji Day kicks off on July 17, and in celebration of the event, Apple today shared details on new emoji that are coming to iOS devices "later this year" as part of the Unicode 11 emoji release. 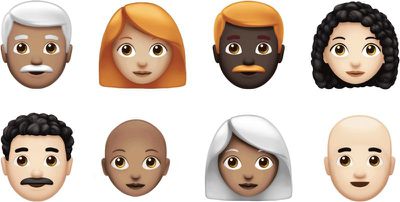 Apple plans to introduce 70 new emoji characters later this year, with new options for red hair, gray hair, curly hair, and no hair, along with smiley faces that include cold face, party face, pleading face, and face with hearts.

Super heroes, an eye-shaped nazar amulet, and an infinity symbol will be added, along with new animals such as kangaroo, peacock, parrot, and lobster. New food items include mango, lettuce, cupcake, and moon cake.

A full list of the emoji included in Unicode 11 are listed on the Emojipedia site, and Emojipedia was also able to interview Alan Dye, Apple's VP of User Interface Design to get some insight into how Apple designs new emoji.

According to Dye, when designing new emoji characters, Apple aims for a design that's "the most iconic" and "the most timeless representation" of the item in question. There's no specific formula, though, behind the look of each individual emoji.

"Without a doubt, we want it to always feel like an Apple emoji and that's what we're going for, but we really make that decision on a case by case basis," Dye said.

Apple often discusses adding more diverse options, such as emojis for black families, but it's a challenge to come up with an appropriate interface. "I think that you need a UI that can accommodate the variations," Dye told Emojipedia.

All of the new emoji Apple shared today will be available across iOS, macOS, and watchOS, joining the hundreds of emoji options that are already available. Apple has not said when the new emoji will be released, but they could come out either alongside the release of iOS 12 this September or in an iOS 12 update later this year.

Enclavean
I'm all for emojis but anyone else losing track of them all? Takes me forever scrolling through the keyboard to find the one I want.
Score: 35 Votes (Like | Disagree)

canonical
They do less than nothing for me. Pointless vacuous junk that will be out of date/fashion in a year or two.
Score: 22 Votes (Like | Disagree)

RickInHouston
This is beyond nonsense.
Score: 21 Votes (Like | Disagree)

calstanford
World Emoji Day is a sad sign of where the world has gone wrong
Score: 15 Votes (Like | Disagree)

ghostface147
I’m bald with a beard, where’s the emoji that represents us?
Score: 14 Votes (Like | Disagree)