India has ousted the U.S. to become the world's second largest smartphone market after China, according to a new market research report on Thursday.

Figures aggregated by industry analyst Canalys show smartphone shipments in India in the third quarter of this year rose above 40 million units for the first time, representing 23 percent annual growth. 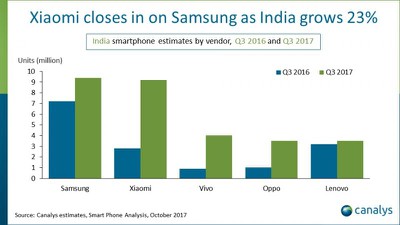 "This growth comes as a relief to the smartphone industry. Doubts about India’s market potential are clearly dispelled by this result," said Canalys Research Analyst Ishan Dutt. "There are close to 100 mobile device brands sold in India, with more vendors arriving every quarter. In addition, India has one of the most complex channel landscapes, but with low barriers to entry. Growth will continue. Low smartphone penetration and the explosion of LTE are the main drivers."

Samsung and Xiaomi, which shipped 9.4 million and 9.2 million units respectively, accounted for almost half of the total market, with Xiaomi expected to overtake Samsung if things continue. Meanwhile, Chinese trio Vivo, Oppo, and Lenovo also posted strong sales in Q3 2017.

Apple's sales, which were too low to make the chart, still indicated impressive growth, with iPhone shipments more than doubling to 900,000 units compared to Q3 2016. However, the relatively high price of iPhones has so far meant smaller adoption rates despite the introduction of lower-priced devices and discounted older models.

It's also worth considering that Apple only began local production in India earlier this year, while the Indian government has been mulling tax and policy exemptions sought by Apple for setting up more facilities to assemble iPhones.

Apple currently assembles iPhones at plants run by supplier Wistron, thereby satisfying India's requirement that 30 percent of products sold by foreign companies be manufactured or produced within the country. Apple also wants to open its first physical retail store in India as early as 2018, and the company is reportedly looking to open four to five flagship-class stores in the country over the next five to ten years.

Meanwhile, China remains the biggest smartphone market by some margin, with more than 110 million shipments per quarter.

If they even, just price their products same as in the US. I think, they have a deal.

For that Apple has to make the iPhones in India for which Apple negotiating certain concessions(it might eventually happen when Apple builds the capability in India manufacturing iPhones, right now Apple manufacturers low end iPhone 5C in India but later they might start making the latest models as well). Apple product still worth $1000(iPhone X 64 GB) for Apple whereas taxes and duties levied for getting it imported (for Indian market) added to the price tag so much. Even in US various State Taxes the price will be slightly higher (may be between 5%-10%). Excise duty may be the biggest differentiator.
[doublepost=1509107645][/doublepost]

The ASP in India is fairly meaningless to Apple though. Apple doesn't have a unit that sells for less than $350 in India. Where that ASP does mean something is how that average is reached. There are a ton of phones in India that sell for less than $100. There has to be a fair amount of phones above that threshold to raise the ASP to $135. That's where Apple is concentrating.

The problem for Apple in India is retailing and carriers subsidy. Once they work out a proper acceptable revenue sharing methods, they can match US prices and possibly reach over many millions. No one with right mindset would part away so much for electronics in India who are very smart in evaluating costing of products based on its functionality, resale,utility and depreciation etc..

Even in US Apple popularity was initially increased along with career subsidy. Not many in US would pay annual ransom for an electronic good. They are far smarter than than rest of the world, hence Apple adopted that strategy initially. Now they locked the most in the ecosystem, they slowly start demanding upfront payment for the most part or whole device at retail price.
Score: 4 Votes (Like | Disagree)

69Mustang
Provides some perspective doesn't it? Should help some understand why Tim has been desperate to penetrate India's market.
Score: 4 Votes (Like | Disagree)

GrumpyMom
Apple does need to make its retail stores happen in India. We’ve had way too many MacRumors forum members from India sharing their service horror stories over the years when they try to get things fixed or issues addressed through resellers. It’s not that the resellers are bad, either. I’ve read some resellers attempting to provide extraordinary customer service. But their hands are tied, at times. So many of the complaints that MR readers tried to help with would have been so easily settled if the Indian customer could have had an Apple Store to go to for help.

I’ve got good friends from India and the picture I get from them of India is that it is a very promising market for Apple. But Apple sells not just phones but it’s whole ecosystem and service quality to justify its prices and reputation, and for that they need to definitely be more present in India. Hopefully India’s government will let that happen.
Score: 4 Votes (Like | Disagree)

Are there many apps in the native language(s)?

iOS adoption is good with lots of native linguistics apps (but in India people generally accept English Apps but for rural areas are still behind in terms of acceptance of English as the main written and spoken language). There are way too many languages in India but right now Apple is successful in providing linguistic support major ones.

827538
Still not the second most important when most of the phones being sold are extremely low profit budget devices. The US and China are still by far more important.
Would be more interesting to see the capital expenditure of phones by country.
Score: 3 Votes (Like | Disagree)

Provides some perspective doesn't it? Should help some understand why Tim has been desperate to penetrate India's market.

Absolutely. India's 1.3 billion people would get any CEO excited!

However... the average selling price of a smartphone in India is around $135

But because of India's massive population... there are still a lot of people who can afford an Apple phone.

I'm interested to see how it all plays out for Tim and Apple!
Score: 1 Votes (Like | Disagree)
Read All Comments