After first traveling around France earlier in the week and meeting with French president Emmanuel Macron, then heading to Oxford University in the United Kingdom for the opening of The Oxford Foundry, Apple CEO Tim Cook has now traveled to Stockholm, Sweden today. Just after 9 a.m. local time, Cook was spotted getting out of a black, unmarked Mercedes in Stockholm.

Cook was on Kungsgatan, a street in central Stockholm where Apple's office is located within the city, and an eyewitness speaking to Breakit [Google Translate] said that the CEO traveled with "a whole entourage" into the building, then "rushed out" a few hours later. Cook is likely making the usual rounds to other Apple locations, including potentially checking on the progress of Apple's upcoming flagship store in Kungsträdgården, a park located near Apple's offices in the city. 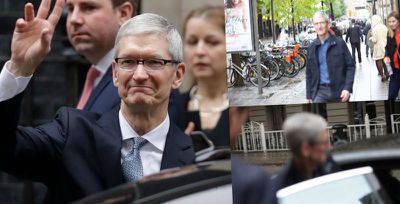 Photos by TT and Jon Wahlqvist, via Breakit

"He had a whole entourage around as he walked across the street," says an eyewitness to Breakit. Tim Cook and his co-workers entered the gateway to Apple's Stockholm office. A few hours later, the Apple boss rushed out of the building again.

Breakit's reporter Jon Wahlqvist asks Tim Cook what he does in Stockholm. However, the Apple boss did not seem to be interested in addressing any such details: "The only thing he said was terrific, terrific, terrific and gave up his thumb. From the car he then waved in the nearest presidential style, "says Jon Wahlqvist.

Cook also stopped to discuss augmented reality with Feber [Google Translate], where he explained that the first few apps using ARKit are comparable to the opening of the App Store in 2008. Even though this first wave of apps might not wow everyone, Cook said that eventually iPhone users will not be able to "imagine a life without" augmented reality. Cook has made similar AR-related comments for years now, and just this week sat down with The Independent and Vogue to discuss the topic even more in-depth.

I do not think they need to understand, not directly. I would like to compare it with when we opened the App Store 2008. When the first apps came out, people were not so impressed. I remember people wrote things like "this is not so amazing" and "this will not be so important". Today, we can not imagine a life without mobile apps and we use them for everything.

I think we'll see a similar curve that we saw with the usual apps. After a first phase, the curve of use will point straight up. AR is fundamentally different to VR because AR can be a part of everything you do, every day.

The interview further discusses how AR can "enhance" human experiences and day-to-day life without replacing anything, as well as how the technology needs to coexist with Apple's initiatives in the artificial intelligence space. Cook also continued championing students learning to code: "I think everyone who goes to school should learn how to code, but I do not think everyone should be a computer engineer. I think the knowledge to know what's possible is the most important, whether you're a fashion designer or journalist or whatever it is."

A visit to the breathtaking forests of northern Sweden with @IggesundAB, our partners in innovation and sustainable packaging. pic.twitter.com/STYKFQ8LZt — Tim Cook (@tim_cook) October 12, 2017

Tim is on the hunt. I have a feeling this a a prerequisite to something bigger.

I agree. Hes really pushing this AR.
Could they have come up with something revolutionary, finally?
Score: 6 Votes (Like | Disagree)

RowellE
At this point, I feel like he's just going to random places to talk about random things just so people at those places get excited over it when they see him and he gets to feel like a celebrity.
Score: 6 Votes (Like | Disagree)

bollman
Standing next to a stump.
Person from Iggesund: All the way up there grew the tree before we chopped it down and shipped it to China.
Tim Cook: Breathtaking
Score: 4 Votes (Like | Disagree)

Michaelgtrusa
Tim is on the hunt. I have a feeling this a a prerequisite to something bigger.
Score: 4 Votes (Like | Disagree)

… local time, Cook was spotted getting out of a black, unmarked Mercedes in Stockholm.

Honestly now -- who marks a Mercedes?
Score: 4 Votes (Like | Disagree)

I have to agree, Tim is an expert on augmented reality.

I hope you're joking.
Score: 3 Votes (Like | Disagree)
Read All Comments